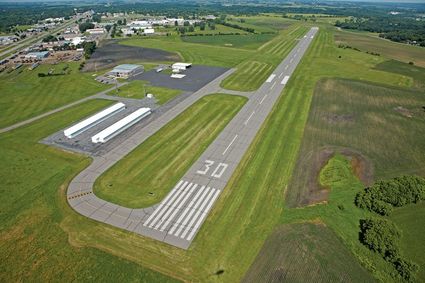 "Back in the "good old days" pilots could walk into a Flight Service Station (FSS). Weather briefings were delivered "over the counter" by one of the staff. At various times there were 10 FSS sites in Minnesota and one of them was at the Redwood Falls Municipal Airport. In the old FSS, the walls were festooned with charts and the ambient sound was the clatter of the teletype. In the 1980's, the FAA consolidated the Minnesota system into a single Flight Service Station and closed the one in Redwood Falls. The consolidated one's gone too, and calling FSS now involves a conversation with either a computer or somebody in Texas. An automated weather station (ASOS), weather computer (MnWAS) and a remote communication outlet (RCO) have replaced the FSS at Redwood Falls; but it's just not the same.

Redwood Falls had an early brush with aviation fame. Harold Peterson graduated from Redwood Falls High School and became an Army Aviator. In 1919 he was patrolling the border in Texas when he got disorientated and was force to land in Mexico. Peterson was held for a ransom of $15,000 by some associates of Pancho Villa. After some interesting dramatics, the Army paid up and Villa let Peterson go.

By 1931 some locals had bought an airplane and hired Jack E. Robinson (no relation to the baseball player) to teach them how to fly. Mr. Robinson stayed in Redwood Falls and in 1937 started a flying service on rented the land that the airport would eventually occupy.

In 1941 he got Charles Doms to agree to an experiment in which Doms would go from zero hours to solo flight in a single day. It worked so well that Doms purchased Robinson's business the same year. After World War II the City issued bonds to purchase the land, and the Redwood Falls Municipal Airport was opened in 1948.

Today the main runway is 4000 feet long and equipped with first class lighting systems. There's a turf secondary runway and a full system of taxiways. Self-service fueling includes both aviation gas and jet fuel. You can camp on the airport, and there's a courtesy car available. A fly-in breakfast happens every June and is sponsored by the Rotary Club.

In 2004 the old FSS building was replaced by a modern Arrival/Departure building and storage hangar. There's a meeting room, flight planning area and pilot's lounge. A unique aviation business is also housed there. David Fuhr was an aviation mechanic in the Army and maintained the OV-1 "Mohawk" during the Vietnam War. He learned to fly in Redwood Falls and after the war became an agricultural pilot and civilian maintenance technician. When the "American Wings Museum" began restoring Mohawks, Mr. Fuhr came up with the idea of using them for aerial photography. Commercial use of the OV-1 never got any traction, but it did lead to Fuhr starting "Airborne Data Systems" which is now the country's largest aerial mapping company and based in Redwood Falls. 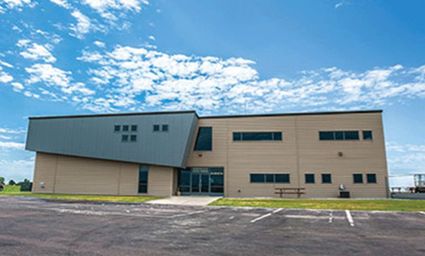 Redwood Falls was founded by Sam McPhail in 1864. He commanded troops in the 1862 Dakota War. McPhail also was a land speculator, newspaper publisher, judge and county attorney. North Redwood Falls was founded in 1869 John St. George Honner who owned the local granite works. The two Cities merged in 1996. Richard Sears was the first railroad station agent in North Redwood Falls. When a local jeweler refused to accept a shipment of watches, Sears took the order and started selling them through the mail. Eventually Sears & Roebuck became the world's largest mail order business. A lot has happened around the area and the Redwood County History Museum has it all documented and much of it on display.

The 1862 war didn't go well for the Native Americans, but many still live around Redwood Falls. The Dakota now operate "Jackpot Junction" with a hotel and casino. The place also has some good food, a golf course, and live entertainment.

There's a shuttle available to and from the Airport. If gambling isn't on your agenda, the Redwood Falls area has two other golf courses and lots of other good eating places. Alexander Ramsay is the largest municipal park in Minnesota with 219 acres, and an attraction all by itself. These days you have to use a computer for your weather briefing, but Redwood Falls is still a great flying destination.