A partnership with the Sun 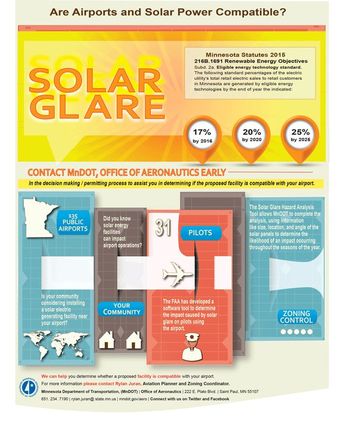 "With the constant and rapid changes in technology that have been the norm for the past few decades, it is exciting to see where we were and where we are today. Just look at the changes in the capability of telephones. Twenty years ago a cell phone was only something corporations could afford. Those phones made and received calls, but did almost nothing else. Now you have phones that are more computer than phone and can do nearly anything a laptop or desktop computer can do.

Some technologies, however, grow in small steps over a period of time, unlike the telephone. One of those technologies is solar energy generation.

We refer to the solar energy producing devices as solar cells. With bundles of cells connected as a larger single unit, solar panels can convert solar energy to provide significant useable power.

After initial costs of purchase and installation, solar systems can provide abundant, low cost, clean energy. But before installing any solar systems at or near your airport, there are a number of very important factors that must be thoroughly understood and planned for, prior to purchase.

Rylan Juran, an aviation planner for the MnDOT Office of Aeronautics, is the resident expert on solar systems at or near airports. We asked him a few questions about solar systems and what should be considered before ordering one.

• What must people first consider before planning to install solar facilities at or near their airport?

The impacts a solar facility can have on an airport are real. A solar facility is a major investment, and once in place, will be costly to move or alter. It is important to make sure that the proposed system is compatible with the airport before a final design is chosen.

• What impacts will this have on the airport or aviation?

There are some concerns with creating obstructions and structures that are incompatible with an approach, but the main concern is glare that could be caused by the panels. We don't want to create hazards for pilots during the critical approach phase of flight.

• What are some of the other issues one might come across when planning to install a solar power system?

In addition to glare impacts, solar panels must be clear of both on and off airport safety zones. I can help also help with facility siting that meets these requirements.

• How will we know if the solar panels will emit too much glare, before they are installed?

The FAA has identified the Solar Glare Hazard Analysis Tool (SGHAT) to determine impacts of solar facilities on airports.

The tool uses variables like size and location of the installation as well as approach paths to an airport to determine any potential impacts from solar glare.

Juran added, "Solar panels are generally compatible with airports and the goal of this analysis is to make sure that they are. Usually small design changes can result in a system that's compatible."