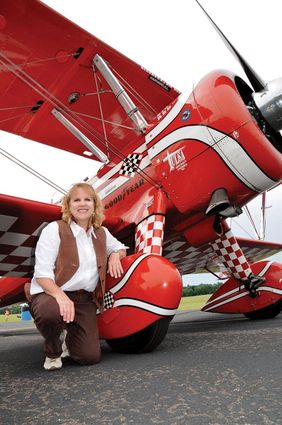 Susan Dacy from Harvard, Illinois perches in front of her Super Stearman, after pleasing the crowd with her aerobatics.

Photographer Ray Pittman attended the Burnett County Airport Gandy Dancer Fly-In/Drive-In in July to enjoy the day and get a few shots of the days activities.

For the hungry, a wild rice pancake breakfast served by the Ag Club of Burnett County. For those on the ground there were static aircraft displays, local emergency vehicle displays, inflatable bounce houses for the kids, classic cars to view. A variety of aerobatic performances kept eyes of attendees skyward for much of the day. 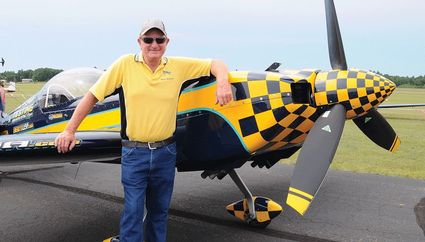 Darrel Massmen and his black and yellow checked Panzl were part of the line-up of aerobatic performers at the Burnett County Airport Air Show.

While many general aviation aircraft flew in for breakfast and the festivities, static displays were also available for folks to view close up. Displays included a Mig 17, the Sea Fury, a Cirrus SR22, T6s, Bird Dogs, a Stearman, the Howard, Merlin, an and an L39 Jet.

Webster and Siren fire departments brought fire trucks and other emergency vehicles, a favorite, not only with children, but their adult counterparts as well.

In the lineup of aerobatic performances were Grant Neilson, Susan Dacy, and Darrel Massmen. Cloudy, rain-threatening weather influenced the length of airtime, shortening each performance but giving viewers a thrill nonetheless.

The Rice Lake Model Airplane club provided performances, as well as information on flying model aircraft, and how to join the ever-growing membership.

Whatever the aviation interest of attendees, the Burnett County Airport Gandy Dancer Fly-In/Drive-In filled the need.