Grass is a Gas for Brainerd Aces 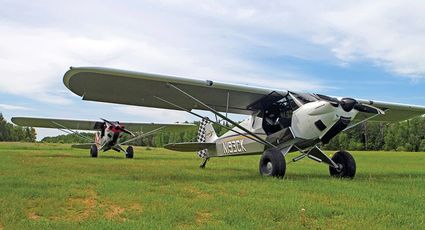 A couple of Carbon Cubs inviting their pilots to take to the skies during the Grass is a Gas Poker Run from Brainerd Lakes Regional Airport.

In what promises to be an annual affair, the first Grass is a Gas Poker Run was held at Brainerd Lakes Regional Airport on Saturday, June 11.

An almost perfect weather day resulted in 17 aircraft and 28 participants turning out for a great day of aviation enjoyment celebrating "grass roots" aviation. Carbon Cubs, Super Cubs, Cherokees, Cessnas, a Just, a Maule, and a Comanche rounded out a varied field of general aviation aircraft.

Flying from Brainerd to four grass strip airports, participants collected playing cards in sealed envelopes to reveal their poker hands upon arrival back at Brainerd.

Pilots could fly them in any order, providing they started and finished at Brainerd.

Many out of town pilots came from as far as North Dakota, southern Minnesota, and the Twin Cities, as well as a good group from St. Cloud. Adding to the fun was a National ATV Mud event at Hill City (right at the airport), and a wedding reception to be held at the Backus Airport later in the day. A Cessna decorated "Just Married" greeted poker run pilots on arrival.

The competition was keen for the top three prizes. In the end, the best hand was a pair of aces, queen high, held by Wendy Miller of the Twin Cities.

With 40 door prizes and 28 participants, no one went home empty handed, winning everything from coolers to cookbooks, signed baseballs and hats, and numerous gift certificates.

A big thank you to all the local businesses that donated very nice gifts to make a fun day even more fun. Given five airports and separate decks in each, it was possible, but unlikely to have a five of a kind hand.

The Yahtzee prize was a 30-minute aerobatic ride in an Extra 300 based at KBRD. No one was lucky enough to draw such a hand, so the ride became the first door prize with Roy Seckerson from North Dakota the lucky winner.

A former crop duster, Roy had the time of his life on the ride. He is probably still wearing the smile he had when he returned to the airport. Pilot Andy Dunlap commented there was nothing he could do in the airplane that Roy did not enjoy, and the luck of the draw picked just the right person!

Local Piper Comanche driver Bill Mattson has flown his airplane all over the country, but never landed on grass. The poker run opened up a whole new dimension in his flying. 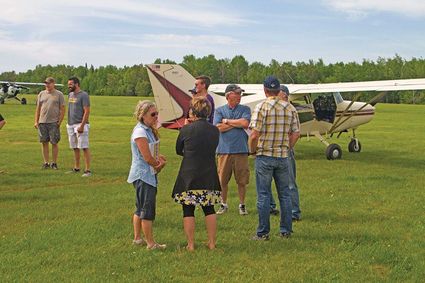 Folks gather in pleasant conversational groups as they await their turns in the comings and goings at each stop of the Poker Run.

Thank you to those individuals who manned each airport, and to those who volunteered their time and kept boots on the ground to make this event 100% free, and highly successful.

A fine group of pilots flew heads up and safely, Despite a few traffic jams, everyone said they had a great time at each airport. Many of those involved were quite vocal in their desire to make this an annual event!

Brad Thornberg is a photographer, pilot, and promoter of general aviation. He and Debbie, his wife live in the Brainerd Lakes area. Thornberg says, “Photography is a way to share flight and our Minnesota landscapes with people.”