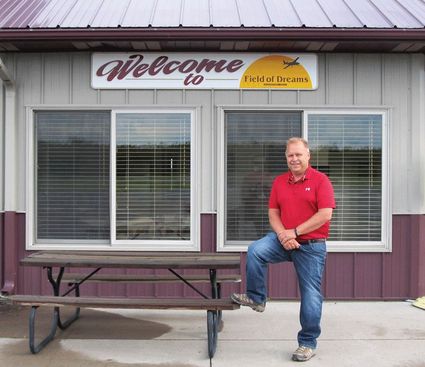 Brian Weidendorf's vision turned into reality with the building of Field of Dreams Airport, uniting community, aviation entities, and construction crews in a record amount of time.

When Brian Weidendorf was young, he was torn between two careers, one in aviation, the other in land development. He decided to do both. He obtained his private pilot's license at age 17, after which he steadily gained additional ratings.

Airlines weren't hiring in 1981 so he did a two-year stint flying for a company out of Grand Forks, during which time real estate tugged him in that direction as well..

"Real estate turned out to be a better deal," said Weidendorf. "I ended up making enough money in real estate so I could afford to fly."

One night nearly twelve years ago, while Weidendorf was managing the theater he built in Hinckley, a notice for a land auction east of town caught his eye.

"I ran out there and ended up buying this piece of land though I had no idea I was going to build a runway," said Weidendorf. "It was just such a unique piece of land. Then I thought, wow, what a great place for an airport."

It wasn't long before he began to design and build Field of Dreams Airport, complete with Eagle Air FBO and three hangars.

"It took us almost a year from start to finish," said Weidendorf who was obviously oblivious to the length of time it normally takes just for FAA approval alone.

"The Feds approved it easily," said Weidendorf. "The state was real easy to deal with, too. It would probably have taken five to seven years for them to design and build an airport. They probably thought, well, if I'm willing to spend my money, then have at it."

It was the county and township that took a bit more convincing. Locals were concerned about the noise level.

"It was about six months of hard struggling to get it approved by the township," said Weidendorf.

The entrepreneur assured himself a peaceful existence with the airport's design. Field of Dreams Airport comprises 60 of Weidendorf's 200-acre property. Three sides are flanked by farm property he owns. The other is a neighboring farmer's field, effectively nullifying the opportunity for noise complaints to arise. Nice.

Of the three hangars, two are rentals housing local and regional aircraft. The other is dedicated to Weidendorf's 172 Cessna float plane, upper deck offices, and a conference room. Eagle Air's A&D building pays tribute to Weidendorf's prowess as a hunter and fisherman as well as a pilot. The taxidermy mounts in the aviation space rather than the home space may well contribute to the fact that Weidendorf and Shari, his wife just celebrated 35 years of wedded bliss.

"It's just a lot of stuff you wouldn't expect coming in and out of here," said Weidendorf. "We have some smaller twin engine aircraft coming in, some big twins and turbines, and a few charter flights here and there."

Never one to sit long on a completed project, the entrepreneur is already planning the next new thing at the airport.

Weidendorf said investing into the right light sport aircraft company would allow him to build a training facility on the grounds. His goal is for people to get ratings, purchase aircraft and have them serviced, all at Field of Dreams.

"They could do the whole thing here, a one-stop shop," said Weidendorf. "We feel we're in the perfect spot for it. You don't have to worry about calling the tower. You just jump in and go.

"I think this airport and a lot of airports like this are going to turn into a light sport mecca. A majority of people flying would do much better in a light sport. That's our next really high priority right now."

"I enjoy the heck out of business," said Weidendorf. "I love doing deals. I get a high from it. I never think of the money, ever. I always think of doing the next deal."

A Cessna 172 amphib sits comfortably in a spotless hangar lined with offices and a conference room.

At 55, the man with a plan is looking forward to what else the future has in store.

"I need a lot of years yet," said Weidendorf. "I'm excited. There are too many things to do yet. I want to do more things than I think I have time for, but I'm going to try to get them all in."

Yes, the pilot is still hands on.

"One of my highlights is, I flew a floatplane with a couple friends of mine down into the Bahamas," said Weidendorf. "Our wives flew down on an airline and met us there. It was just a hoot. I want to do more stuff like that. I want to explore through the Caribbean."

It may be a trip for recreation, however, given his entrepreneurial mind, perhaps Brian Weidendorf will ponder what improvements could be made in the Caribbean Islands for his next project. It's just the entrepreneur in the pilot.