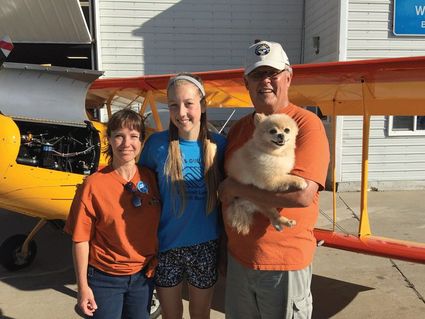 Heather Sorum, Martha Nustad, Ted Kiebke, and Raymond the airport dog stand in front of Kiebke's Acro Sport 1 with a 200 Mercury outboard power head and custom made instrument panel. Kiebke, a retired aeronautical systems engineer and Navy Veteran found the engine first, then built the aircraft around it. He is also an active aviation advocate to anyone who will stand still long enough to listen.

EAA Chapter 1498 at Detroit Lakes Airport packs a lot of fun into a one-day adventure. July's event included a fly-in complete with breakfast and lunch, a car show offering a few vehicles not seen at most exhibitions, and a skydiving experience from that went well beyond the usual demonstration. Skydive Fargo offered tandem jumps to attendees the day before, during, and after the days events.

Much of the success of the airport's activity level is owed to three and four generations of aviation family support, as well as individual enthusiasts like Ted Kiebke, a retired aeronautical systems engineer, or new pilot and EAA member Heather Sorum. One of the most impressive aspects of the Detroit Lakes Airport Fly-In was the number of young people involved in aviation.

At 16-years of age, Martin Carena is a deep well of information about the P-51 Mustang warbird in which he arrived for the event. Carena has already built nine years of volunteer experience at the Faro Air Museum where he is a knowledgeable tour guide. Carena's very realistic future goals include piloting a warbird. 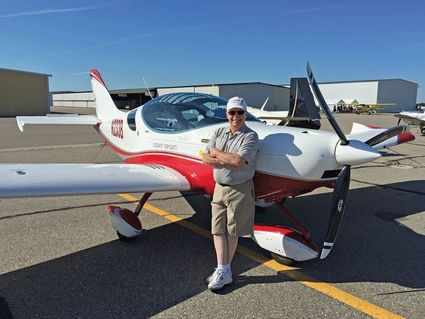 Tom Borgen, was influenced by Heather Sorum, his daughter to start flying after retiring from farming. One of the reasons Borgen loves his 2015 Sports Cruiser Light Sport aircraft is because, although you have to be fit to fly, you don't need a standard medical classification from the FAA.

Retired farmer turned pilot Tom Borgen is an inspiration to all, but particularly the baby boomer generation, stating that retirement years are the perfect time to take up aviation, particularly in a light sport aircraft.Though Skydive Fargo gave an impressive skydiving demonstration at the Detroit Lakes Airport Fly-In, the more engaging experience was the opportunity to take a tandem jump with the experienced skydivers.

Club president Justin Wageman was quick to point out to new comers that prior to the thrill of free falling from 10,000 feet, comes the discipline of perfectly packing a parachute before getting into the airplane. All club members displayed that discipline many times over as they prepared for flights with their excited human cargo.

Accelerated Free Fall (AFF) is jumping out of a plane, then falling until you pull the rip chord to the parachute. It was part of the tandem adventure.

Drifting delicately through the air after the chute opens is also engaging. Those desiring a taste of the high life, may feel free to contact Skydive Fargo at http://www.skydivefargo.com.