This is the last installment of feature writer Jim Hanson's article on aircraft #230 in his repertoire of flight experiences. This series began in the June issue of the Minnesota Flyer. 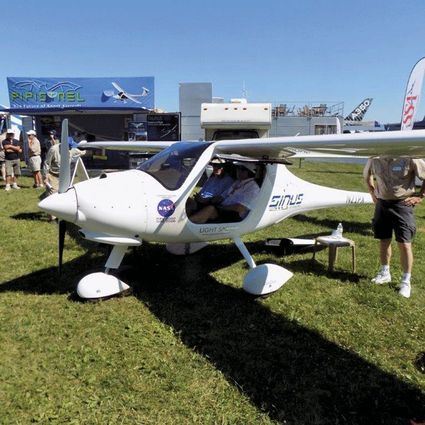 The Pipistrel flex-wing is available with either a tri-gear or conventional gear. The drag penalty at glider cruising speeds is negligible.

Time to turn the fun up another notch, and shut the engine down!

Paul explained that we had to let the engine cool and stabilize. The time to do so was minimized due to the liquid cooling on the Rotax.

"Just bring the power back to idle and hold altitude," he advised. "When the airspeed gets below about 50, shut the ignition off and pull this big knob in the center of the panel to feather the prop."

The clean airframe took nearly a minute to slow down. On feathering the prop, it got very quiet, except for a minor buzzing.

"That's my fault," Paul explained. "I didn't get the sealing tape (common on gliders to eliminate drag on wing fairings) right when I installed it this morning."

That's how quiet this aircraft is when you can hear the buzzing of a bit of tape!

There were no thermals on this early morning flight. We moseyed around at minimum sink rate, losing only 150-200 feet per minute, and gliding 28 feet forward for every foot we lost, the equivalent of many two-place pure gliders, and three and a half times the glide ratio of the average light plane.

We tried approaches to stalls. Once again, the Pipistrel displayed its glider heritage with benign stall behavior. Gliders live on the edge of a stall.

After nearly 10 minutes of gliding flight, we entered the traffic pattern at Albert Lea. Paul elected to make a power-off glider-type landing.

I fully expected him to take the controls, but he coached me through the pattern and landing. We deployed one notch of flap on base, and like a glider, pulled half spoilers.

We used 55 knots on final. I found it easy to handle the crosswind. There was plenty of time for the round out and flare. I was rewarded with a good landing.

We let it roll to the connecting taxiway, and turned off, all without power. We unfeathered the prop, and the Rotax started right up.

Once I could talk again, after getting rid of my perma-grin, we talked about the aircraft.

Paul told me about some of the changes made to the Pipistrel since the demonstrator.

In addition to the panel display, a huge 55# baggage compartment had been added to facilitate the use of the Pipestrel as a touring aircraft.

The cowling had been changed to make it easier to check the engine. Perhaps the biggest change was the Flex-Wing, the ability to change the wingtips from a 50' wingspan to a more hangar-friendly 40' wing span.

The gliding performance is reduced from 28:1 to 24:1, but the speed increases. The tips can be changed in only five minutes.

The aircraft have been flown around the world, over the top of Mt. Everest, and even won motor-gliding contests.

Later in the afternoon, when summertime thermals started working, I watched enviously as Paul gave a ride to one of my friends. It was supposed to be a 20 minute demo, but they stayed up well over an hour. Who wants to quit when there is lift like that!

You can have your Pipistrel the way you want it, as a kit or ready to fly conventional, or tricycle landing gear.

There is a lot to be said for the airplane, not the least of which is to watch the reaction of your passenger when you switch off the engine!

As Sherm used to say "Thanks, Paul, for an interesting trip around the patch!"

See a video of the Pipistrel at https://www.youtube.com/watch?v=BKLksxfNkUQ or go to the Pipistrel website at http://www.pipistrel.si/plane/sinus/overview

I had barely finished this article, when Paul called to tell me that he had sold the demonstrator aircraft. The good news is that he is getting another demonstrator aircraft, a tri-gear flex-wing aircraft with all of the improvements mentioned above. I saw the aircraft at Oshkosh, and Paul promises that he will bring it to Albert Lea for a follow-up flight. 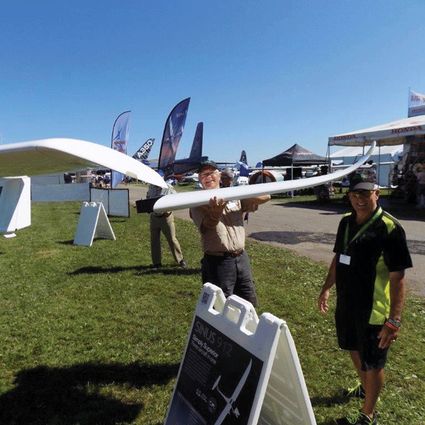 Paul Randall demonstrates the "long" wing tips. The "short" wing tips fit in a regular T Hangar, but the long tips can be installed in less than a minute.

While at Oshkosh, I was able to see the flex-wing aircraft for myself. While many manufacturers promise easy changes to the wing, this aircraft really is easy to change the wing from the short wing to the long wing. True to its glider heritage, the long wingtips can be exchanged for the short wingtips and vice-versa in only one minute each.

I also was able to view the short-wing or speed-wing aircraft. Though it looks the same as the flex-wing, other than the wing span, I was told that the fuselage has a different construction that allows a VNE speed of 164 knots. The advertising says "Touch 150 knots on 100 horsepower!". Something had to give to get this performance and economy. It is the glide ratio only 17:1 for the speed-wing aircraft.

Jim Hanson is the long-time FBO at Albert Lea, MN. He flies airplanes, helicopters, seaplanes, balloons and gliders. Jim has owned motor-gliders before, and likes the idea of being able to fly a motorized glider on the spur of the moment. He has flown 320 unique types of aircraft and if you have a unique aircraft that he may not have flown, contact him at his airport office at 507-373-0608, or jimhanson@deskmedia.com