During World War II, the U.S. Army Air Corps trained almost 200,000 male pilots. Less than 1100 female aviators became Air Corps pilots during that period. "Women Air Service Pilots" or WASPs wore military uniforms and flew military aircraft, just like the men. Disregarding those facts, the Defense Department insisted they were civilians and denied them veterans benefits. It took an act of Congress in 1977 to fix that nonsense. One of those pioneering women was Faribault native Elizabeth Wall Strohfus. Ms. Strohfus gave up flying after the War, but later became a well-known advocate for women in aviation. She was inducted into the Minnesota Aviation Hall of Fame in 2000.

Dale Jackson was another trail blazing pilot from Faribault. Jackson set several records including 417 barrel rolls in 1930. In 1931 with co-pilot Forest O'Brine, he made an incredible flight that last 647 hours. He died in an airplane crash in 1932 and the first Faribault Airport was renamed Jackson Field in his memory. The "old" airport was located just south of the town and only "a few hundred yards" from the house Dale Jackson grew up in. Jackson also was inducted into the Minnesota Aviation Hall of Fame in 2011

A town that was the home of aviators like Jackson and Strohfus should have a first class airport. It does. The "new" Faribault Municipal Airport is a modern, all weather facility. Planning for relocating the airport began in 1943, and by 1944 a state grant had been secured. Faribault Municipal Airport opened at the current site in 1947. Today it boasts a main runway that is 4250 feet long, lighted and equipped with Runway End Identifier Lights (REILs) and Precision Approach Path Indicators (PAPI). When the weather is not so nice, there's RNAV/GPS approaches. A new turf runway was opened in 2012 and is 2300 feet long. There's a full system of taxiways, plus plenty of apron and tie-down space. Both Avgas and Jet Fuel can be purchased from the "self-serve" system. Taxis and rental cars provide ground transportation. The Fixed Base Operator (FBO) does maintenance on just about every kind of General Aviation aircraft.

Faribault takes great pride in all of its history, not just aviation. Much of it is in the archives of the Rice County Historical Society. The Society also operates a first class Museum. There are plenty of properties in the town that have historical significance, and over twenty of them are on the National Register. The City has a self-guided history tour that's available as a brochure or pod-cast. One stop on the tour is the Cathedral of Our Merciful Savior. Henry Whipple was the first Episcopal Bishop of Minnesota and this was his church. He laid the cornerstone in 1862 and construction was completed in 1869. Whipple championed the rights of Native Americans when that wasn't a popular position for a white man. The Dakota called him "Straight Tongue", for speaking the then unpopular truth. His tomb is under the Cathedral's altar. One of the church's stain glass windows was donated by Native American children who raised the funds by picking and selling berries. 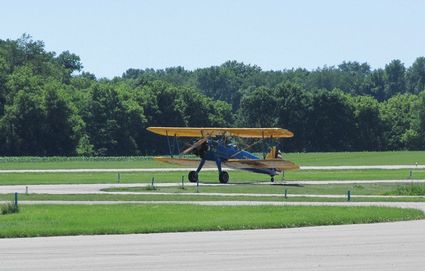 The Woolen Mill Company is definitely worth a visit. It might be the last business that can claim to sell clothing "made in the USA". Another cool place (literally) is "The Cheese Cave", where they make some delicious stuff that's the only American cheese aged in sandstone caves. Naturally the local celebration is called "Heritage Days" and features everything from carnival rides to a soap box derby. That happens in July, and sometimes includes a fly-in.

When the airport relocation was being considered, a group of local pilots got together to support the effort. Now called the Faribault Area Pilot's Association (FAPA), it might well be the oldest pilot's group in Minnesota. Continuing the history theme, one of the Airport's most prominent businesses is "Rare Aircraft" where vintage Waco and Stearman bi-planes are restored to pristine condition.

There's so much interesting stuff to do in Faribault, you might want to stay a few days. Four hotels are conveniently located within ½ mile of the airport. Fly-in, do your business (if that's why you came), and stay for some of the fun stuff. Or make the trip just to see the place. You won't be disappointed.