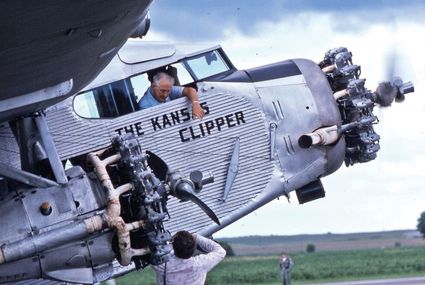 Max Conrad is co-pilot in LeMaster Trimotor at Le Sueur 1973.

This is the sixth in a series of thumbnails of the ten most important Minnesota aviation pioneers, from the files of the Minnesota Aviation Hall of Fame.

All photos are from the Minnesota Aviation Hall of fame collection. Original photographers are noted where it is known.

" Max Conrad was born in Winona, Minnesota the same year the Wright Brothers made their first controlled powered flight, 1903. As a young man, he ventured to Denver, Colorado and took flying lessons in the wake of Charles Lindbergh's famous flight. He returned to his hometown in 1928 with a Laird Swallow biplane, hoping to make aviation his career. The following year, he totaled out the Swallow and purchased two Spartan biplanes, forming Conrad Flying Service at Winona, barnstorming weekends.

Tragedy struck soon after when he dove off his plane's wing in an attempt to stop a woman from walking into its spinning prop. The woman was killed and the prop struck Max in the head. His brain was severely damaged to the extent he spent the next three years re-learning how to speak and write his name. Because of his lasting handicap, he was forever after a loner, his conversational and social skills diminished. He refused to quit flying after finding his manual skills had not been affected. He purchased a pair of Ryan Broughams, very similar to Lindbergh's "Spirit of St. Louis" airplane and began monthly flights to California as well as local flights in Minnesota. In 1937, he bid on a Ford Trimotor and, to his surprise, won the bid. Using it, Conrad Flying Service sight-seeing flights kept bread on the table.

In November, 1940, Minnesota was hit with a major blizzard on Armistice Day. From a beautiful sunny morning in Southern Minnesota, the temperature dropped dramatically and a raging snowstorm trapped scores of deer hunters in the Mississippi River Valley. Despite the high winds and zero visibility, Conrad boarded his Piper Cub and floating with the wind, located dozens of hunters and steered rescue sources to them. Conrad spent the afternoon and evening weaving back and forth through the hills and forests, searching for victims. His efforts were applauded by the press and emergency services. His fame was made that day.

But, tragedy struck a second time in 1943 when an accidental fire swept through his Winona hangar and he lost his entire fleet. The Trimotor also suffered its own troubles when an engine backfire set the plane on fire and it was lost on the ground. To make ends meet, Conrad found contractual work on the Canadian Division of Northwest Airlines. Contract finished, he then found work with the Minneapolis Honeywell Company, flying a Northrop Delta airplane, testing Honeywell systems and products.

With Max's work schedule, trying to feed his ever-growing family, his wife, Betty had a nervous breakdown and it was decided to send her and eight children to live in Switzerland. In 1949, Max had flown a charter to New York and spotted unsold Piper and Stinson aircraft on the Piper Aircraft Company ramp in Lockhaven, Pennsylvania. (Stinson was at that time part of the Piper organization). He wrote to William Piper and suggested that he could deliver a Stinson aircraft to Italy for the company, and not only earn a discount on the purchase of a Piper airplane, but also be able to visit his family. Piper agreed to the scheme. Conrad modified the aircraft to add fuel tanks and successfully completed the flight. Thus began the exemplary ocean-spanning delivery flight career of Max Conrad. He would eventually make 150 crossings of the Atlantic in light planes, and another 30 across the Pacific.

Long-distance flights tugged at Conrad's imagination. In 1954, for example, Conrad made a solo non-stop flight from New York to Paris in a Piper Apache in 22 hours. In 1959 he flew a record Casablanca to Los Angeles flight of over 6000 miles in 59 hours. In 1960, in a Comanche aircraft, Conrad flew a course from MSP to Chicago to Des Moines and in 61 hours flew a total of 6921 miles to set a non-stop record that had never been broken. He completed an around-the-world flight via the equator, then attempted an around-the-world flight via the poles. In 1964, his first attempt found him making a wheels-up landing on a Greenland glacier. Fortunately, he was rescued within a few hours after walking several miles to open water. In 1970, Conrad fueled up "St Louis Woman," a Piper Aztec, with 476 gallons of gas and attempted the polar flight again. This time, he had to abort the flight, but talked himself into trying once more. The skis on his plane troubled him. They created too much drag and cost him airspeed. He had the plane's skis changed out to wheels. When the plane became mired down in snow at Murdo Sound at the South Pole, he reluctantly abandoned it there and realized a lifetime of danger and ambition was coming to an end for a tired old man. In 1965, with over 57,000 hours in the air, Conrad was awarded the Harmon Trophy for Accomplishment in Aviation.

Conrad was a talented musician, playing several instruments and writing music for a dozen songs. He was a kind, soft-spoken, religious man. I met Max early one Sunday morning at Johan Larsen's Aircraft Museum at Flying Cloud Field in 1976 when each of us had a book to sell. He had flown into Flying Cloud and told me he had walked several miles to church and back that morning. Sally Buegeleisen, Conrad's biographer, stated in her book "Into The Wind" "Max Conrad has lived at the extremes of human experience. His life a chronicle of personal courage, survival against the elements, loneliness, bitter defeat, triumphs, tragedies and most of all the will to keep trying." 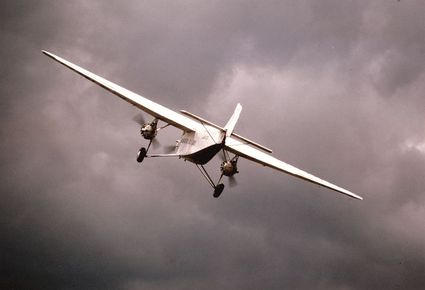 Sherm Booen wrote," Max said little to those around him. He seemed to be in a distant world, moving constantly, eating a sandwich on the run, on his feet for long hours, sleeping on a sofa in the hangar. He later told me he prepared for his long flights by getting very little sleep for days before the flight." NWA Captain Walt Bullock met Max in Taipai after one of Max's ferry flights. Conrad had no change of clothes, nothing. Bullock bought him dinner and loaned him some yen.

Max Conrad was an original, a unique individual. For the years 1950 to 1970, he was front-page news over and over. The "Flying Grandfather" was inducted into the Minnesota Aviation Hall of Fame in 1991 and deserves to be recognized as one of Minnesota's most important aviation persons.