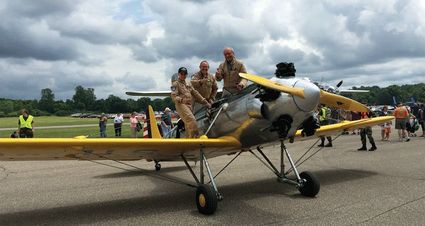 The T-6Thunder North American Flight Team rolled out to perform for the crowds at Discover Aviation Days at Anoka County Blaine Airport June 4-5 during a nearly perfect weekend. The event opened and closed with the flag ceremony conducted by the Minnesota Wing Civil Air Patrol, Anoka County Composite Squadron.

Visitors were treated to a wide variety of aircraft.The Commemorative Air Force Minnesota Wing's B-25 Bomber, Miss Mitchell was one of the crowd gatherers. A hometown favorite, the 1949 Hawker Sea Fury, nick named "Sawbones" after its orthopedic surgeon owner Curt Brown, parked for a while to allow visitors a close up view. At times Sawbones played with the other Warbirds in the sky, much to the entertainment of the crowds. Brown has spent almost as much time in the skies as he has on the ground if you take into account his hours as a commercial airline pilot, Air Force pilot, space shuttle commander, and Reno Race participant with Sawbones.

Cloud cover was high enough to provide a background for the magnificent birds without interfering with the impressive visuals offered by the highly skilled pilots.

The T-6Thunder North American Flight Team rolls out to perform for the crowds at Discover Aviation Days at Anoka County Blaine Airport June 4-5 during a nearly perfect weekend.

A new vendor at this year's Discover Aviation Days was Bill Bune president of Guns of Freedom based in Anoka, Minnesota. Bune began collecting firearms as a high school kid but moved to the professional category through the years. All the firearms displayed during Discover Aviation Days were operable, though none were loaded. Some folks are nervous around guns but not Bune who is a licensed vendor and manufacturer.

"If someone were standing here with a machete, I'd be worried," said Bune. "With an empty gun, it's no big deal."

Many of the folks attending the annual Hangar Dance held at Golden Wings Aviation Museum Saturday evening dressed in period clothing representative of the WWII era. They danced to big bands sounds, ate popcorn, and posed for photos.

The education tent with vendors and Veterans was packed with visitors both days. EAA Chapter 237 was busy as usual with their kiddie plane rides. Young Eagle Rides were available as weather permitted.