This is the second installment of feature writer Jim Hanson's article on aircraft #230 in his repertoire of flight experiences. See the intro to this series in the June issue of the Minnesota Flyer. 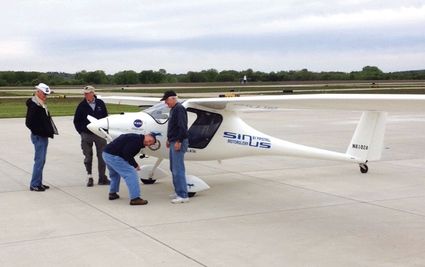 Park a Pipistrel motor glider on the ramp, and you are sure to draw onlookers!

When flying any new aircraft, I like to study it first. I look it over carefully. In this case, I noted the long wings, the glider-like T-tail, the wide and roomy cockpit.

Paul and I conducted a pre-flight, with Paul explaining what we were looking at.

The aircraft is powered by an 80 hp Rotax 912 4-stroke water-cooled engine, the most common engine for LSA aircraft.

Rotax makes a 100 horsepower version, and I asked Paul why it wasn't installed.

"Reason number one is, you don't need it" he explained.

"The aircraft has a 600 pound useful load, even with the whole-airframe parachute syst...