Stand on a cloud

One of the perks and beauties of flight is the rare opportunity to fly through a cloud (most likely in an airliner), skimming through the tops of puffy white cumulus, and flying along the great halls and alleys between them. The beauty is at once immense and inspiring! But you very likely have had a fleeting thought of wishing you could stand on a cloud. And in fact you can, but that would be a cloud on the ground!

A surface based cloud, (fog), one of the most common weather phenomena encountered in aviation, can form when the air is stable and generally calm. It is primarily a hazard during landings and takeoffs because it occurs at or near the surface and greatly restricts visibility. The wind can move the fog around if it blows at five miles per hour or less. Any more than that and the fog will be lifted to become a low stratus or stratocumulus cloud.

There are several different names for fog. The names are generally indicative of the way the fog is formed. Radiation fog for example, forms when the land radiates heat back into the atmosphere and space. The now cooled land cools the air directly above it, lowering the temperature to the dew point.

Advection fog develops when warm, moist air moves over a cold surface. The cold land surface then cools the air to the dew point temperature. Evaporation fog is created when cold air passes over warm water. The cooler air is saturated with water vapor from the normal evaporation process. Thus when the dew point is reached, fog appears.

When warm drizzle or rain falls through cool air, evaporation from the precipitation saturates the cool air and Precipitation fog occurs. This fog can often be quite dense. It may spread over a large area for an extended period of time from several hours to several days. 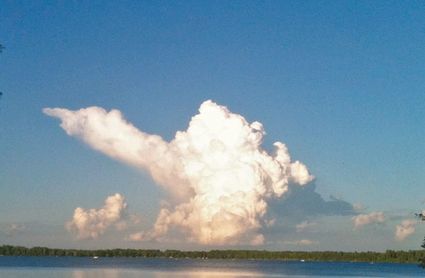 The educated pilot gathers a variety of information from the wide variety of cloud formations.

Ice fog develops in cold weather. When the air temperature is 20 degrees Fahrenheit or colder the water vapor in the air freezes, becoming ice crystals. Once the air temperature is zero, or below, ice fogs can form rapidly in the exhausts of automobile and aircraft engines. It is possible under calm wind conditions for the fog to coat the runways or roadways with a thin layer of ice.

Use extreme caution when flying into conditions that can cause fog. If the weather shows a close dew point/temperature spread, it is likely that you will encounter foggy conditions and restricted visibility. It is important to note that when there is a two degree or less temperature/dew point spread the pilot may be able to see the ground but the slant range visibility may be zero!

Have alternate plans available in case you need to divert because of fog. Bear in mind that fog can cover large areas making it impossible to divert with the fuel left onboard. Once on the ground, use extreme caution when taxiing under conditions of restricted visibility. Remember, the key for safe flying is simple...plan ahead and plan well.