Many scientists believe that the human brain receives nearly 80% of the information it processes about the world around it, through vision. Thus only about 20% is derived from touch, taste, smell, and hearing combined. Illusions can occur when our senses misinterpret or receive ambiguous sensory information. Though there are a number of different illusions that can occur, this article will only address a few of them.

Many illusions in flight can occur when visual acuity is diminished such as when haze, fog, rainfall, snow, or darkness is encountered. Even the forces of gravity can affect what a pilot sees under certain conditions. Though not every pilot may experience illusions, and the exact causes are not completely understood, there are enough reports about aviators experiencing them to warrant strong pilot awareness of their potential.

Visual illusions can be either foveal or vectional. Foveal illusions are most frequently associated with landing approaches in reduced visibility or at unfamiliar airports when visual references clues are significantly reduced. If, for instance, a pilot is approaching an unfamiliar runway that has an uphill slope, there would be a tendency to feel that the aircraft is too high thus potentially leading to a landing well short of the runway. If the runway slopes downhill, the pilot may feel the aircraft is too low and falling behind the glide slope. If correction is attempted based on what is perceived, it will cause the aircraft to land long, and possibly fast.

Landing in whiteout-like conditions, or on smooth, somewhat reflective surfaces (like frozen lakes or icy runways), or approaching lighted runways at night in a relatively unfamiliar and featureless area, can significantly impair a pilot's judgment of height and distance. This is especially true when the horizon and ground are obscured by meteorological elements or darkness.

Vectional illusions are illusions of movement and are among those most commonly experienced. Test subjects have been placed in a darkened chamber and light from a rotating source was reflected on the walls of that chamber. The movement of the light on the walls can cause a sensation of rotation of the body.

Another example is when you are stopped at a traffic light with your foot on the brake but the vehicle next to you creeps forward. Your immediate sensation is that you are going backwards and your reflex action causes you to stomp on the brake. These are illusions of movement.

Autokinetic illusion, or autokinesis, is caused by the involuntary movement of muscles that control the eye. Thus when a pilot is in total darkness and observes a point of light in the distance, even if fixed, that light can appear to move. Reports have been filed that some pilots have actually followed these lights believing they were other aircraft, and have impacted the ground. Clearly the autokinetic illusion is most dangerous at night.

Flicker vertigo is another unusual illusion that can affect anyone given the right conditions. "Flicker vertigo" is simply an imbalance in brain cell activity brought about by light sources that emit a flickering, rather than a steady light. Lights flickering at a rate of between 4 to 20 times per second can produce unpleasant, if not dangerous reactions in some people. The possible reactions include, dizziness, migraines, nausea, unconsciousness, and even epileptic seizures.

Natural and artificial light sources can precipitate flicker vertigo, especially florescent lighting and television screens. In aviation there are many potential problematic light sources. These can include sunlight being cut by a windmilling propeller thus causing a flashing effect, and rotating beacons or strobes on aircraft and ground service vehicles, in certain atmospheric and lighting conditions.

Here is just one simple example of how flicker vertigo can affect a pilot. A military pilot in a high performance propeller driven aircraft had spent some time at 16,400 feet AGL during his training flight this day. When the training was completed the pilot returned to base and executed a perfect landing under the watchful eye of the air traffic controllers and, no doubt, a host of instructors.

The aircraft rolled out and came to a stop on the runway but made no attempt to taxi to the hangar or clear the runway. A ground vehicle was dispatched to the aircraft to see what the problem was. The pilot was found unconscious, bent over the controls, with the engine still running at an idling rate of speed. 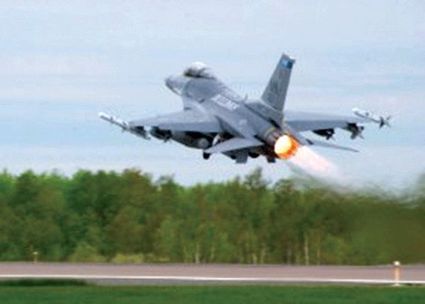 Heat is just one of many sources of illusion creation.

The cause was determined to be the rays of low-lying sun that were shining through the slowly spinning prop blades. The resultant flashes hitting the pilots face caused him to lapse into unconsciousness. The flash rate was about 12 per second.

Now, here is one final example of a visual illusion. Look at the title of this article. It is deliberately spelled with three "l's". But a vast majority of the readers will not catch this "illusion" until they are told it is there. This illustrates just how easy it is to fool the eye. So when you fly, be aware of the illusions in flight.

The Aeronautical Information Manual, Medical Facts for Pilots, Chapter 8-1- 5, provides a wealth of addition information about other illusions of motion and position. Also consulted for this article was the Surgeon General Manual for the U.S. Navy, edition 19-91, and various articles from Transport Canada.