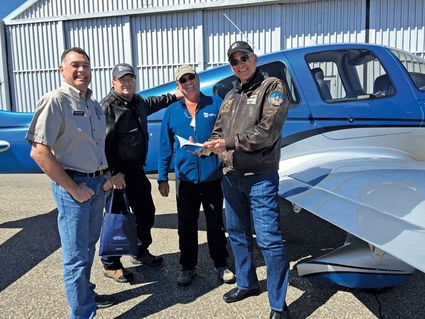 "Three years ago we had our first Great Minnesota Aviation Gathering," said Gregg Strathy, one of the founding directors of the Minnesota Pilot's Association. "This is our third. They just keep getting bigger and better. We've just really enjoyed it."

The event was held at the Anoka County Blaine Airport.

"We enjoy having everybody out here," said Strathy." Good weather helps. We've got great airplanes on display. We've got great speakers. We hope we are providing a great service for pilots in Minnesota."

Strathy knows the value of introducing aviation to people at an early age. He has been flying since he was 15-years old when he took flying lessons from his father. He now has an ATP, float plane, and glider ratings. He is also a CFI.

"I just have a grand old time in the air," said Strathy who is now, with Jan, his wife, a proud owner of a new Cirrus SR22 T.

The Minnesota Pilots Association is the organizer of the GMAG. 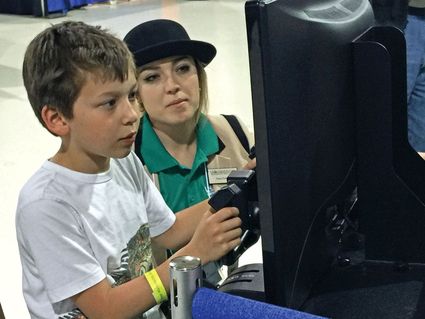 Hayden Mercil focuses on a simulated flight with UND aviation student, Sara Seaman as a guide.

"Randy Corfman gets the credit for being the energy behind the Minnesota Pilot's Association," said Strathy. "Randy has participated in a number of events like this other states. For several years he felt we really needed to have a similar organization in the state of Minnesota.

Hangar Flying Sessions over the course of the two-day event covered such subjects as Soaring in Minnesota, Light-Sport Aviation: Is It For You?, Risk and Resource Management in the Cockpit, Setting Up a Flying Club at Your Airport, and Stump the Experts: An Hour with Bolduc Aviation.

Golden Wings Aviation Museum was open to the public. A magnificent array of aircraft flew in, flew over, and parked for people to view up close. Young Eagle flights were also given. An award ceremony concluded the well-received event.