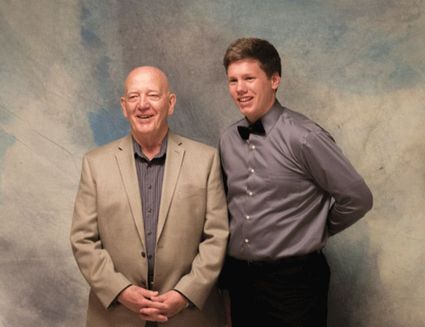 Brady Clark is the first recipient of the first scholarship award presented by the Blaine Airport Promotions Group (BAPG).

Graduating from Blaine High School-CEMS program with a 3.99 GPA, Clark is on his way to basic training in the Air Force National Guard, after which he will attend tech school with a focus on hydraulic mechanics for the C-130 Hercules aircraft.

Clark is also enrolled in the commercial aviation program for the spring semester of 2017 at the University of North Dakota which begins in January. Future plans include applying for the Air Force National Guard's pilot program as an officer with a focus on flying the C-130 Hercules.

In his application for the BAPG scholarship, Clark attributes the CEMS program at Blaine High School for "making me a stronger student by putting me through challenging classes."

In an accompanying letter of recommendation from his mathematics instructor, Matt Smude, Clark was noted as always coming to class "with a willingness to work hard and learn."

The $500 scholarship is yet another milestone achieved by the BAPG, founded in 2010 by Harvy Karth with a mission to raise awareness of the economic impact of the airport on the surrounding region, promote greater participation of public activity at the airport, promote aviation education to enhance a future work force, and raise awareness of career opportunities in aviation.