his is the first installment of feature writer Jim Hanson's article on aircraft #320 in his repertoire of flight experiences. His story continues in the July issue of the Minnesota Flyer. 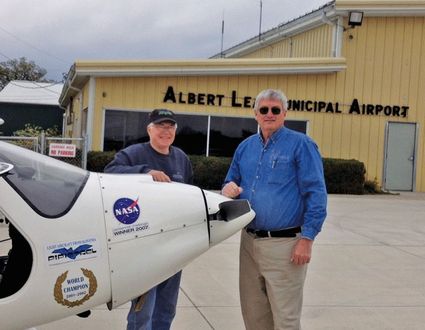 The cockpit is really quite roomy--even housing Jim (6'4" and255 pounds) in with "normal-sized" Paul Randall.

Most pilots enjoy flying different kinds of aircraft. Each aircraft has its own handling characteristics, performance, and even its own personality. In my aviation career, I've been able to fly a number of aircraft-320 to date.

The person who has flown the greatest number of different aircraft is Royal Navy Pilot Eric "Winkle" Brown with 487 unique types flown. Brown, now 96, flew for the Royal Navy before WW II, was engaged in engineering and experimental test flying during the war (including being loaned to the U.S. during that period), and flying a number of captured Axis aircraft after the war for evaluation purposes.

The person with the highest number of unique types of aircraft flown in the U.S. that I am aware of is noted aviation author Barry Schiff, one of my favorite authors, with over 360 unique types.

As for what constitutes a unique type, that is also open for debate. An example might be the Piper Cherokee. They are all PA-28s but they differ so. I count the Cherokee 150/160 as a unique type, they were produced concurrently, and share the same pilot handbook. The differences are negligible. The Cherokee 140 is a unique type, no back seats or baggage door, and a directly connected nose wheel. A Cherokee 180 is another unique type with a different engine, increased performance, and a higher useful load. A Cherokee 235 is yet another type, with a different fuel system, engine, and a huge useful load. I lump Cherokee Arrows together as one type even though the engines are different, (one with fuel injection) though I do make a distinction for the Turbo Arrow with a Continental 6-cylinder engine, fuel injection, and a turbocharger. With Beech Barons, I count the straight 55s, A, and B models, all powered by IO-470 engines, as one type, and the IO-520 Baron C,D, and E models as one other type. The model 56TC and the Model 58s have their own type certificates. Though others do, I don't count them as a unique type unless there are substantial differences.

These discussions of the airplanes are not designed to be pilot reports, no discussion on stick force gradients or scientific studies; no talk about "the best airplane I ever flew; just hangar talk about airplanes we've flown. Now that we have that background out of the way, let's talk airplanes! 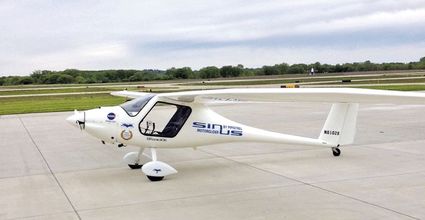 The long, thin wing, the teardrop cockpit, and the "stinger" tail of the motor glider are clear links to the pure glider heritage--with a 28:1 glide ratio--about 4 times better than a Cherokee.

Paul Randall from Pipistrel-usa offered the use of a Pipistrel motor glider for giving rides to the A&P students at Lakes Area Technical Institute at Watertown, South Dakota.

We also used the occasion to give glider rides to 25 South Dakota teachers as part of Beta Testing an initiative to provide aviation-based lesson plans for Science, Technology, Engineering, and Math teachers. It succeeded beyond our wildest dreams. We gave 270 rides over the long weekend utilizing two other motorgliders from LATI, plus two local gliders. I didn't get to fly the Pipestrel, however, we were just too busy!

Paul rode to the rescue again. He brought the Pipistrel down to Albert Lea during the Region 7 Glider Contest and Greg Klein from LATI brought his motorglider. This time, I wasn't going to let Paul leave until I had a chance to fly the Pipistrel!

See the next installment of the Pipistrel article in the July issue of the Minnesota Flyer.