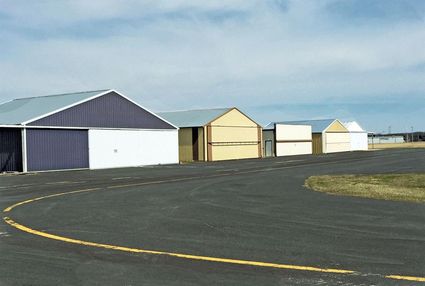 conjunction with Paynesville Town and Country Days, held the second week in June.

"We always have a parade on Wednesday," said pilot and Paynesville business owner Aaron Kranz. "They coronate the queen during that time, too. There's a car show, a street dance, just a lot of activity in town that week."

The Fly-In will be Friday and Saturday, the last two days of Town and Country Days. A shuttle bus will be available to take people from the airport to the hotel, bars, restaurants, café, retail stores, and the street dance. Paynesville also boasts a bakery, a bowling alley, and a golf course.

"We'll have a package for pilots if they want to pick up a round of golf," said Kranz. "We have a very nice golf course."

All this activity is direct turnabout from the bad old days when dissention arose around the subject of airport enhancement. Rising above previous discord between county, city, and state regarding airport planning, the present day city council and airport commission is progressive, positive, and prophetic.

"Right now we have 20 city owned and six private hangars at the airport," said Kranz. "They're all full, and there is a waiting list."

Kranz adds that plans are in the making for another set of ten hangars though some commission members are wondering if that number will meet the needs of those desiring spots. He and other members of the current Paynesville Airport Commission are advocates of Friedrich Nietzsche's adage, "That which does not kill us makes us grow strong."

"It was a fairly short grass strip," said Brown. "We had trees on the north end. On the south end we had the high lines that went by the golf course. So I got accused of being a bush pilot one time when I was at Flying Cloud. When somebody found out I was from Paynesville, they said, 'Paynesville? You've got to be a bush pilot to get in and out of that place.' But we flew out of there for years until we got the current airport."

Brown has a personal history with the airport, as his grandfather Horace Sheldon was one of its original supporters. Sheldon was also the Paynesville Township clerk.

The original airport had a north south runway as well as an east west. As the city of Paynesville developed, one of the new businesses erected a flag pole that ended up being an obstruction to the east west runway.

"There was no zoning at the time," said Brown. "So when they put this flag pole up, that pretty well closed the runway. They ended up plowing up the runway so nobody could use it because they were afraid they'd tangle with that flag pole."

In the mid seventies, there was talk of building a new airport. Though state funding became available, a disagreement arose between the city council and township board regarding the value of an airport to the community. While some felt an airport only served local pilots, others, including Brown were of the belief that an airport is an asset to the entire community because it attracts new business.

With no unified voice, the new airport project floundered. Even the existing grass strip lost its funding as well as its license. Local pilots banded together to apply to the state for a private license, which they received.

"So when I started flying out there, Paynesville actually had a publicly owned private airport," said Brown. "You had to have permission to use it."

A new era arose during the mayoral reign of Jeff Thompson. 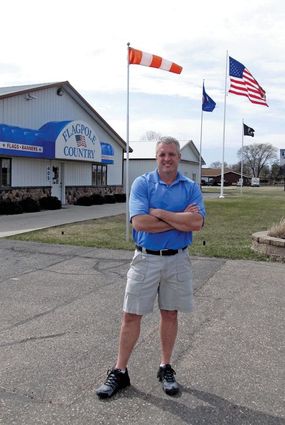 Pilot and Paynesville business owner Aaron Kranz is also a member of Friends of the Airport, a casual but dedicated group of aviation enthusiests who understand the benefits an airport brings to a community.

"He was probably the instrumental one," said Brown. "If it wouldn't have been for the mayor being in favor of a new airport, it never would have happened."

Paynesville then received NPIAS funding (National Plan of Integrated Airport Systems), which enabled construction of a new airport just west of town. The original hangars were moved. New hangars were added. Due to aviation activity, more are needed. A beacon, VASI lights, and an IFR GPS system have been installed.

"It's a lot of fun to hear airplanes going over and seeing activity down there now," said Brown.

While Brown feels a deep-seated personal connection in following in his grandfather's footsteps, he also has the satisfaction of knowing the airport benefits the entire community.

With a growing industrial park serving four national and a wide variety of local businesses, all with access to aviation services, he is confident that Paynesville Airport has shaken off the shackles of past dissention and is now on a forward, progressive track.