You've just got to hear about Rick's Aviation Adventures 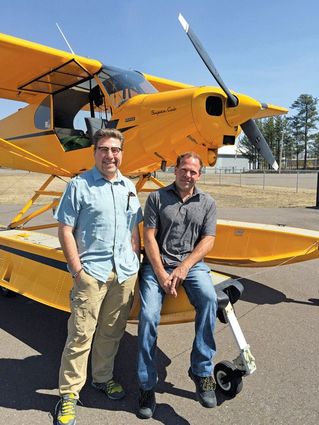 If you are lucky enough to take flight instruction from Rick's Aviation Adventures, be kind to yourself and schedule time to hear a few stories about Rick Mercil's varied background, as well.

One great story you'll want to hear is how Mercil became drawn to aviation in the first place. It was after his schooling in the monastery and before he worked on the Kibutz in Israel.

"One summer I had an old beat up 1949 Chevrolet pick up truck," said Mercil. "A buddy of mine and I were sitting on a gravel road drinking warm beer and we saw a crop sprayer. I watched him crop spraying and that stuck in my mind.

"When I came back from Europe I just thought, I've got to do something with my life. So I thought to myself, I'm going to go learn how to be a crop sprayer. That was the start of it."

Yes, he is more than capable of teaching you whatever you want to know about flying. Not only from 20 seasons of crop dusting experience, but for all the other venues in which he has experience.

For 38 years Mercil has taught people to fly in a variety of capacities. At UND, after creating a Task Analysis from which he and associate experts built the Spectrum Training program designed to take China Airline students from zero time to flying high performance jets, Mercil fine-tuned his communication skills, particularly with students who were also studying English as a second language.

"For example," said Mercil, "we'd come down on a windy day as we were on final and I might use the phrase, 'It could be a little squirrely.' Well, squirrely to them is a difficult phrase to translate. The root word is squirrel, so they would wonder if there were squirrels on the runway. You had to be very careful with words so students could process what you were asking. That was a very important part of instruction."

NASA also recognized Mercil's training expertise. There, he was one of the developers of the Advanced Aircraft Training Experiment (AGATE) initiative. In his ten-year span he rose to the position of Assistant Director. He trained pilots from a variety of countries including Qatar, Bahrain, Saudi Arabia, Taiwan, as well as several European countries.

Mercil also spent a year before he decided to try a little something different.While it may seem odd to some to leave a successful career at its peak, to Mercil, it was the right thing to do. Though he continued to fly, in 1998 he started a financial advisory business with Merrill Lynch which has prospered as well.

"Everybody asks me how I can connect the two," said Mercil. "I tell them I've been taking people from point A to point B using sound judgment and decision making my who life, so it's no different."

On a personal note, Mercil met his wife Rosa when he was chief instructor for the University of North Dakota. Actually, that event involves another great story.

"She was an air traffic controller so I always used to hear her voice," said Mercil. "When I was at the university, I thought I'd like to meet her. So I arranged for the Air Base, Approach Control to create a safety liaison for the flight instructors at the university. That way, I was able to see who this person was."

After they were married, the couple adopted a son, Hayden who is following in Mercil's footsteps. Hayden has been flying since he was two years old. At seven, he feels right at home in a cockpit.

"He gets a buck for the vending machine every time he sweeps the hangar at the Crookston Airport," said Mercil. "When he spends time at the airport he has to help out."

His desire to teach his son and to introduce him to aviation has prompted Mercil to begin flight instruction once again.

"As I get closer to retirement, which is a few years away yet, I want to have something to do that keeps me young and active and busy with Hayden," said Mercil. "Aviation was such an important part of my life early on. I came out of the Monastery with my hair down to my shoulders, not a very focused young man. Aviation provided a focus and a discipline I really needed at that stage of my life.

"I met so many great people in aviation. I want my son to meet those kinds of people. I want him to learn those types of people exist. They're characters. They're fun. They're focused. They're kind. They're just good people. 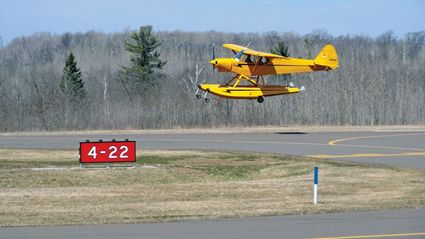 It was a day that the wind sock at the Moose Lake Airport stood out straight for much of the time. However, Rick's Avation Adventures student Brian ? took the opportunity to experience cross winds while landing his new 1960 Cub.

"I've been flight instructing for 38 years. I just enjoy seeing guys like Brian (the student who flew into Moose Lake) and some of the other people I've instructed who have that kid-like attitude as they are getting a new checkout in an airplane or a float rating or a tail wheel endorsement or a biannual flight review.

So, if you are lucky enough to take flight instruction from Rick's Aviation Adventures, be kind to yourself and schedule time to hear a few stories about Rick Mercil's varied background, as well.

Be sure to ask him about how he walked away from that early crop dusting incident, what he learned from it, how it impacted his life, and how it made him one of the most valuable instructors you could ever hope to meet, and one of the most interesting people.