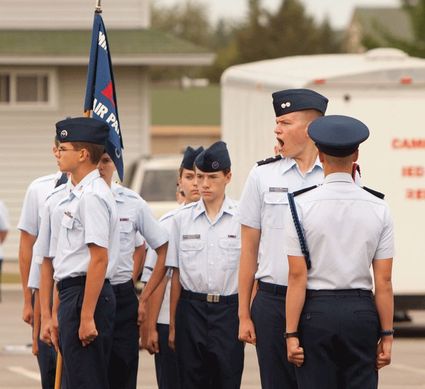 Cadets learn military customs and courtesies along with drill at the annual Camp Ripley summer encampment.

You may have seen them at an air show patrolling the flight line. Maybe you saw them last summer helping security at the Burnsville Fire Muster. If a child or an adult is reported lost, odds are these well- trained young volunteers are searching for them. During the holidays they placed wreaths on the headstones of veterans buried at Ft Snelling Cemetery. If a flood or tornado should visit your area, it is likely you will also be visited by the cadets and senior members of the Civil Air Patrol.

CAP is the official civilian auxiliary of the United States Air Force (USAF). Many people have never heard of the Civil Air Patrol and are often surprised to learn who they are and the community services they perform.

CAP is a volunteer organization with an aviation-minded membership. It performs three congressionally assigned key missions: emergency services, which include search and rescue (by air and ground) and disaster relief operations; aerospace education for youth and the general public; and cadet programs for youth ages 12-20.

The Air Force Reserve's 934th Airlift Wing at Ft Snelling hosts the Ft Snelling Cadet Squadron on base, which makes this squadron pretty unique. Only a few squadrons around the state, and around the country for that matter, are similarly located. Because Ft Snelling is an active military base, cadets are able to get first-hand experience with military life and operations.

Part of cadet leadership learning includes military customs and courtesies. All cadets wear uniforms similar to those worn by the US Air Force, and they know to always salute CAP and all military officers whenever they encounter them!

Cadets learn how to work as a team to accomplish special tasks and services, and they learn to follow their leader's directions. More importantly, they learn how to become leaders themselves. Cadets also learn a broad area of search and rescue techniques. This is important because the CAP is tasked nationally to assist the Air Force in more than 85% of its search and rescue missions. Each year the CAP is credited with saving approximately 100 lives!

The Ft Snelling Cadet Squadron is comprised of cadets from all walks of life, from throughout the Twin Cities metro area. They are middle and high school age students, male and female, some home schooled, while others attend the local public schools, or Twin Cities private and parochial schools.

What these teens have in common is that they all tend to be very focused on academics and athletics, and share an interest in aviation. In fact many take advantage of the free Civil Air Patrol "O" Flights (Orientation flights) provided by pilots of the CAP. It's real, hands-on flying experience and "stick time" in both single engine prop planes and in gliders.

CAP pilots volunteer their time to fly cadets and even instruct them in their private pilot training. Cadets can typically complete their private pilot's license at a greatly reduced cost, and obtain it by about the same time they are getting a driver's license.

In addition to the "O" Flights, cadets get special opportunities every year to fly on military aircraft. It's not unusual to hear cadets talk about the excitement they experienced flying on a Black Hawk helicopter, a C-130 transport or even a Chinook troop transport helicopter.

They get to train each summer with members of the military, getting unparalleled access to highly challenging obstacle courses and other facilities not open to the general public. These are simply experiences none of their school friends will ever have. Unless of course they join CAP ... or the Air Force after high school. 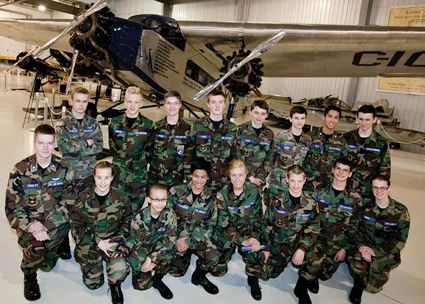 While taking a tour of the Golden Wings Flying Museum at ANE, members of Fort Snelling Cadet Squadron based at MSP are shown in front of a Ford Trimotor flown by Charles Lindbergh.

The FSCS is always eager to attract and recruit young people (must be at least 12 years old) who have an interest in aviation, aerospace, emergency services and developing leadership skills. It's a real commitment to be in the CAP, but the cadets typically find it hard to contain their enjoyment and personal sense of achievement, and of pride, as members of the Civil Air Patrol.

For interested parents or teens who would like more information, visit FortSnellingCap.org to find directions to the meetings and other info. Also take a look at the Ft Snelling Cadet Squadron Facebook page to see loads of pictures and updates on Squadron activities and the experiences of cadets.

The Squadron meets Monday evenings from 6:30 pm to 9:00 pm on the northern side of Minneapolis-St. Paul International Airport, at the 934th Airlift Wing, Air Reserve Station. Visits to the Squadron can be easily arranged by appointment. Just email the Squadron Public Affairs Officer, Bob Sundheim, at bobsundheim@gmail.com. He can answer any questions and help you arrange your visit.