Brooten and Bollig use team approach to breed success on project 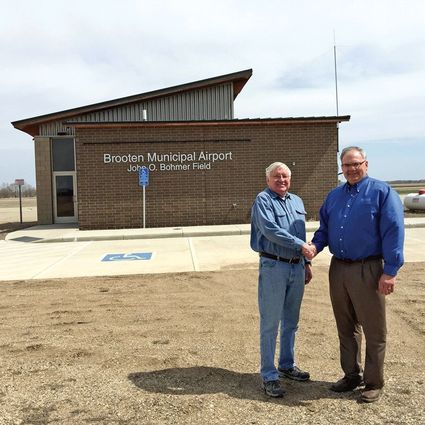 When John Owen Bohmer, Mike Field, and Dale Fauskee looked at the farm fields in Brooten, Minnesota, in the 1950s, they envisioned an airport...and so the journey began. It started out simple.

"We set up a temporary grass strip east of town in a farmer's field," said Bohmer.

It was an uncomplicated era when interest in flying was high and just about anybody who wanted a go at it was welcome. Before long, aviation activity outgrew the little grass strip.

An associate of Bohmer's, Delbert Anderson, who was a member of the Minnesota House of Representatives, and a pilot with the Flying Farmers Association, recommended that Brooten get an official airport designation from the state.

"He said we could go down to St. Paul and talk to the Department of Aeronautics about getting an airport in Brooten, which we did," said Bohmer.

After raising funds through private donations (including a donation from Bohmer himself), the American Legion, and the city, land was purchased along the east side of the city and donated to Brooten for the new airport site.

MnDOT Aeronautics approved the site and granted money for construction of a tar runway. Five hangars were also erected to house airplanes. At that time, there were no water or sewer services, nor any structure serving for an arrival and departure building. A telephone on the outside wall of one of the hangars and a portable toilet sufficed to serve the air traffic.

"Everything went just fine," said Bohmer. "We had Flying Farmers meetings and air shows. There was a lot of activity and a lot of interest flying."

A variety of industries grew, causing increased activity at the airport. Though Brooten still consisted largely of farmland, business boomed, including a flight instruction business, irrigation and related agricultural services businesses, a freezer plant, and a mobility products manufacturing plant.

"When a town has an airport, it's like getting another highway into town," said Bohmer. "It brings in people who do business. It's very important for a town to have an airport."

As years passed, business flourished. An industrial park was established next to the airport. Railroad traffic to the area increased as products from Brooten businesses expanded distribution nationally. Semi truck traffic from West Central Inc., wholesalers of agricultural management products, increased traffic to over 100 hauls a day. At that point, a need arose to have trucks traverse the railroad crossing without compromising safety.

"We were actually contracted by West Central while we were city engineers for Brooten," said Brian Bollig. "They asked us if we could help design a right turn lane at the railroad crossing."

At that initial planning meeting, other needs in the industrial park were found including a requirement from MnDOT aeronautics calling for improvements at the airport, specifically an arrival and departure building.

"They said if we were going to have an airport being used by the general public and different businesses, we really had to have some structure out there other than just a phone hanging on a wall and a porta pottie in the summer," said Brooten Mayor Larry Putz. "It was just not a very tenable situation."

"As needs were identified, it was recognized that everything was going to have to work together," said Bollig. "There was much discussion with businesses in town."

Master plans for the industrial park and for the airport had to be created and submitted to each entity involved. Plans had to show the final vision, but be flexible enough to comply with the requirements of each organization and funding opportunities as they arose.

"I think if we would have pushed really hard, a shoe could have dropped anywhere along the process," said Bollig. "We just constantly moved things around, but we were persistent."

"It was kind of a step at a time," said Mayor Putz. "We'd get one step completed, then we'd work on the next step and the next step."

Funding was one of the most challenging areas. Though guidance on a variety of levels, those challenges were met.

"Finding the funding for projects in these small towns is always tough," said Mayor Putz. "We don't have a big bankroll. We had to come up with some grants and different ways to fund our project. It's been about a five-year process working with Brian to bring this all together so we could make improvements to the airport and make improvements to the industrial park road."

"But it opened doors," said Bollig. "Then, all of a sudden, the project became a priority and it was funded."

Another meeting Bollig attended with Mayor Putz was in the home of a Brooten resident whose partial land sale to the county was instrumental to accomplish road improvements to the industrial park.

"That was one of the things I genuinely enjoyed," said Bollig, "really getting to know the people who were involved."

It was through those meetings that all aspects of the project were funded. 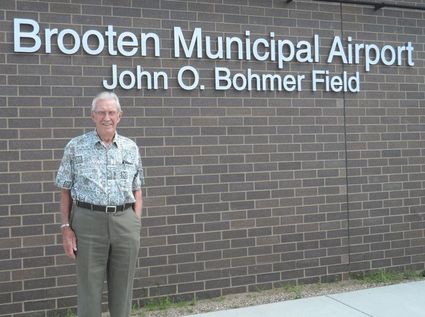 John Bohmer stands in front of the Brooten Municipal Airport Arrival and Departure building graced with the his name, dedicating the field in honor of Bohmer's efforts and vision in starting and maintaining an airport to enhance business growth in his community.

"Even this (arrival and departure) building," said Mayor Putz, "we weren't sure how we were going to come up with the 20 percent local match. Then Dave Bohmer, the airport manager asked John (Owen Bohmer) if he would like to leave a legacy. There were ideas about doing things other than at the airport but John was a flyer from WWII so he said a legacy of building at the airport would fill his desires."

How do businesses and community members and businesses feel about the project?

"Good," said Mayor Putz, "Very good. Putting a shovel in the ground for the building on the airport was real important but all the background work to get the financing lined up, working with Brian to put the puzzle together before we could actually get started, that was key."

Additional phases of the project include installation of the warning system at the railroad crossing and water and sewer for the industrial park. Mayor Putz is making progress in fleshing out those plans.

Those are the exact sentiments of originator of the Brooten Municipal Airport, John Owen Bohmer.