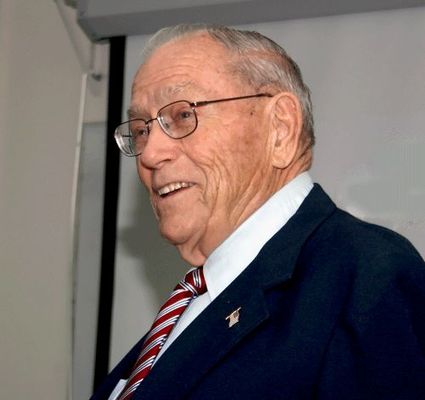 Aviation, while huge in its scope of dollars and cents, and in its impact on our lives today, retains two unique elements that are at best difficult to find in almost any other industry. Those two elements are overriding passion and family.

If you have been active in aviation for a number of years, you can go most anywhere in the country and run into someone you know who is in aviation, or someone who knows well, a person you know well, in aviation. It is that kind of family thing that seems to be unique in aviation.

Anywhere you go you will find strangers, who are simply friends you haven't met yet, but who have a strong and obvious passion for aviation, just like yours. Thus your extended aviation family will continue to grow, and when you leave that location where you have met new aviation friends, you feel not a sense of loss, but in fact, a sense of gain and true pleasure to have them in your life.

It was these elements that made Gerald M. Quilling a quintessential aviator and a true friend to all he met. His greatest passion was aviation. From age 5 until the day he took his final flight West, aviation was the driving force in his life. He was always ready and willing to share his vast knowledge and experiences in and about aviation with anyone who was willing to listen. Somehow he always made time to share his passion with interested and often new members of the aviation family.

Gerry, as he was known, was often initially seen as an imposing figure with a booming voice and a level of confidence that non-aviators might mistake as arrogance. It was never arrogance. It was always passion and inner-strength borne from a lifetime of aviation experience that drove him to speak with almost a child-like level of excitement about aviation. His eyes would sparkle and his energy level seemed endless when he spoke of his greatest passion.

Gerry Quilling was always a teacher. And like any real teacher, his passion showed when he taught. It matter little whether he was talking with a class of 10 year old students or an auditorium filled with adults. There was no mistaking who he was and what he was about. He cared about people and if you showed even a slight interest in aviation when you spoke to him, he would share with you and teach you about the many beautiful aspects of flight and aviation in general. And he did that from his heart, consistently.

Though he had a long marriage to the love of his life Shirley, and raised a family to be strong, passionate and patriotic citizens, he still found time to enjoy aviation and share that joy with the world. Almost anywhere you go in Minnesota, if you mention Gerry's name, that is an immediate opening for an extended conversation, not so much about Gerry, but about aviation and the passion he aroused in those he met and shared with.

Gerry Quilling was a rare aviator who made it a part of his mission in life to give back, while reaching back to pull others ahead, in aviation. No one can doubt how much he cared and how much he shared. Many will recall with a smile his hearty laugh and heartfelt smile whenever he spoke about aviation.

That unique level of passion will be missed, as he was like no other in so many ways. Gerald "Gerry" M. Quilling flew home December 10th, 2015. His commanding voice and presence will be missed, but his passion lives in the hearts of thousands who had the honour and pleasure to be touched by a Master Aviator.