Our memories are sealed, our hearts stolen as Betty flies west 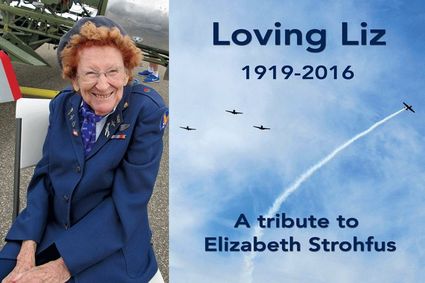 Her impish smile, zest for life, and devotion to flying made Elizabeth "Betty" Wall Strohfus an inspriation to aviators everywhere.

Being 96-years-old and yet displaying the gleam of a five-year-old in her eyes was just one of the many captivating traits of Elizabeth "Betty" Wall Strohfus. Another was how she made everybody who came in contact with her feel just a little better about themselves after meeting her.

Her laughter was contagious, her stories engaging, her love of life bigger than life itself. Yes, the energetic whirling dervish of aviation wore her body out, but Elizabeth Strohfus lives on in the hearts and minds of those blessed to spend even a moment in her presence.

The kind of character the woman pilot exhibited comes from a long line of leaders.

"All the Walls of Ireland are descended from Norman Knights," said Art Roberts, Strohfus' son who coordinated her speaking engagements during the last four and a half years of her life. "The earliest person in that family we know of is Robert Duvall. We have evidence that he was at the Battle of Hastings in 1066."

On her mother's side, were Irish women who, in times long passed, trained male warriors, an activity Strohfus herself carried on during World War II as a qualified pilot of B-16 and B-26 aircraft.

Another tradition Strohfus carried on was historic story telling in which she captivated audiences large and small, often bringing laughter and sometimes tears to her listeners. Art Roberts remembers a story he heard as a child that had a punch line when he grew up.

"My dad was in the Army Air Corps," said Roberts. "He was a sheet metal worker and a draftsman. He crossed the equator 13 times. He was all over the South Pacific. He was in charge of a sheet metal shop repairing aircraft.

"When I was a kid we used to tell people Mom flew the planes and Dad fixed them. I noticed Mom was always a little upset about that. I didn't know why until many years later. When I asked her about it she said, 'Well, I never broke any.'"

Roberts laughed as he commented about his mother's daredevil reputation.

"Since then I've heard many stories about her and I thought, well, it wasn't for lack of trying."

Strohfus was flying long before her time as a WASP. As a young woman she went to a bank putting up her bicycle as collateral for a $100 loan so she could join the local flying club. When she was told women didn't fly, her family heritage burst out in a comment before her protagonist could take another breath.

"Well, this woman does!" she countered.

At the time she joined the Women's Air Force Service Pilots, the organization was considered a civilian group although they followed orders given by the military.

"They would have been court-martialed if they had disobeyed," said Roberts. "They had the same training the men did. The only difference was, they did primary, basic, and advanced training in one location, Sweetwater, Texas."

Though the WASPS trained pilots, performed training missions, and ferried aircraft and supplies, they were not officially made a part of the Army Air Corps until 1977, which took an act of Congress. Prior to that time, women pilots were not publicly acknowledged.

"There were many times when we were kids that Mom would go to Veteran's events wearing her uniform with her wings but nobody believed she flew airplanes because the records had been sealed from WWII," said Roberts. "Then, around 1976 the Pentagon announced that women were going to be flying military aircraft for the very first time. Well, Mom and six other WASPS decided, no. We're going to get that fixed."

Fix it they did. When Congress announced that WASPS were, indeed Veterans, Strohfus also received two Congressional Medals, one for having been in the Civil Air Patrol during the War, and one for being in the WASPS.

"Mom also received her DD214 Honorable Discharge in 1979 from World War II," said Roberts. "That was something she was so incredibly proud of."

When Strohfus graduated, hers was the first class that had uniforms, influenced by woman test pilot Jacqueline Cochran, clothing designer Neiman Marcus, and the color Santiago Blue. The original uniforms Strohfus wore, along with other WASP items, with a few exceptions held by family members, will be donated to the Texas State Women's University.

"That is a repository for WASP memorabilia," said Roberts. "They have archive conservationists, climate control storage, and they are a state university. They have a tremendous advantage over other places in that they lend items out and help set up exhibits for other museums all over the world."

When Strohfus first began her speaking tour, Art Robert's brother Patrick assisted in the logistics. When he passed away, Roberts offered his mother support.

"My initial concept was mom does maybe one talk a month or so," said Roberts. "It turned out it wasn't once a month. It was like every few days. She was doing 60 to 80 speaking events a year at that time (2012)."

After about a year, Roberts realized despite how much she enjoyed it, his mother was continually "on" during a presentation, after which she became exhausted. He tried to limit engagements to once a week but Strohfus was fond of saying yes to requests.

"So it turned into an 80-hour a week job which I've been doing for over four years," said Roberts who quickly added how grateful he was for opportunity.

"It has been such an honor and a joy to support her," said Roberts. "It was a privilege to spend all that time with her. I've seen her in a way you don't normally see your mother.

"She had more enthusiasm for life than a five year old. I'd like to figure out how she did it. She could walk into a room and switch people on like a light bulb. I have no idea how she did it. It was just her. She had such a joy of life you couldn't help but enjoy yourself when you were with her."

When her memory began to fade, Roberts took a more active role in his mother's presentations. At first, gentle reminders helped her remember stories. However, the time came when she simply asked him to tell the story. Still, her presence was so strong, the audience freely enjoyed her stories.

"Sometimes I felt like George Burns and Gracie Allen," said Roberts. "I'd ask her if she remembered a particular time and she'd say, 'No, tell me.'"

Liz Strohfus passed away peacefully on a Sunday evening. By Monday afternoon Senator Amy Klobuchar had issued a press release. On Tuesday afternoon, Roberts had a call from the Washing Post. That evening CBS and ABC national news did a piece on Strohfus.

"I started to realize she's a lot more than my mom," said Roberts. "I've been so close to her for four and a half years it never occurred to me what a national character she had become."

Another realization came to Roberts during the funeral attended by over 300 people, family, friends, associates, and dignitaries. Two A-T 6s did a flyover in her honor. A procession two or three miles long made its way to her burial site.

"Her folks instilled the love of God, country, and family in all their children," said Roberts. "It was very comforting to see how well loved Mom was by so many different people."

A final honor is due Elizabeth Betty Wall Strohfus. She will have the tombstone of a Veteran. 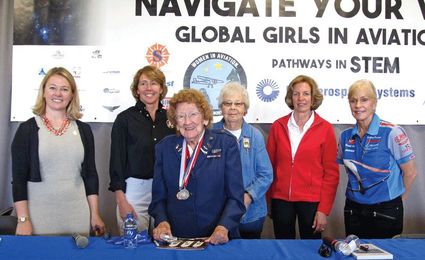 "She is going to be getting an American White Marble headstone from the Pentagon with her name, the service group she belonged to and her wings," said Roberts. "I'm so proud that's going to happen."

Though the woman pilot no longer walks among us, her son knows she will live on in the hearts of those she touched.

"I loved her so much," said Roberts. "I miss her. There are a thousand stories to tell."