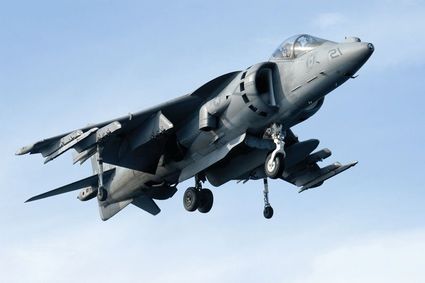 A stunning AV-8B Harrier in flight.

The Duluth Airshow found out today that they have been selected as one of only four shows in 2016 to receive the United States Marine Corps AV-8B Harrier Demonstration Team which will perform during this summer's Duluth Airshow on July 9-10.

The Harrier is arguable the loudest aircraft in the entire US Armed Forces and is arguably, the greatest breakthrough in modern day aircraft technology. The Harrier was the first VSTOL capable (vertical/short takeoff and landing) jet in the world giving the US Marines an enormous advantage on the battlefield.

"We are very excited and honored to have been selected to host the Harrier," said Airshow President Ryan Kern. "We were not selected originally when they made the announcement in December, but due to a cancellation on their schedule they selected us as one of only four shows across the United States that will host the team, so it's a huge honor."

The Duluth Airshow will take place on July 9-10, and will feature the United States Air Force Thunderbirds who have not performed in Duluth since 2010. For more information on the Duluth Airshow or to purchase tickets to Minnesota's largest airshow visit http://www.duluthairshow.com