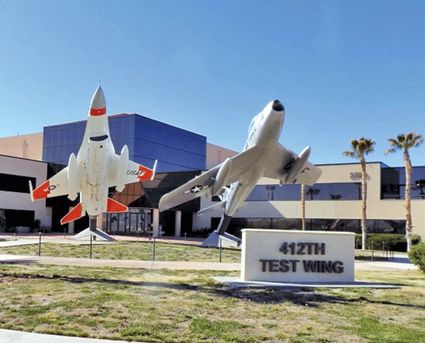 The F-16 and F-86, two of the aircraft tested by the 412th Test Wing in front of headquarters. If you look at the building from above on a Google Earth photo, it looks like a B-2 Stealth bomber!

With a lull in the action at the runway, we toured the ramp at South Base. I was surprised to see a fleet of Skyhawks, and a T-42 Beech Baron.

"Base flying club" said Haire, reading my mind. It's nice to know that these hot rocks types still appreciate flying for itself.

I noticed a number of older aircraft on the ramp. Once again, Haire read my mind.

"Those are destined for the new museum, whenever it gets built," he explained. "Unlike Wright-Patterson (the Air Force Museum) the museum here gets no government funds. They are raising money ($5-7 million) from private donors to build the new museum outside the main gate where the public will have access to it."

Judging from the number of aircraft we saw, it will have to be big to house them all in an estimated 150,000 square feet.

We visited the control tower, the best seat in the house for viewing the base. Not only was the entire base visible, but if you knew where to look, you could still see the outlines of the streets and foundations of the old town of Corum and the Old Edwards near the lake bed at South Base. Change happens slowly in the desert. It was the link to the "Right Stuff" I had been looking for.

We visited the active flight line, a variety of airplanes ready for operational testing, a KC-135 from Mildenhall, England, F-22s, F-16s, and T-38 supersonic trainers and chase planes.

Some of the aircraft had special flight test pitot systems on the nose. Some showed nothing outwardly different than all the rest. Often, it is a computer or a weapon installation that is being flight tested.

Haire was very security-conscious. You can take photos here, but not here. On one occasion, he pointed to a red line, with an admonition not to cross it or I would incur an investigation by the military police. The line was red and white striped in one location, morphing into solid red later on. He pulled me back with a "don't cross" admonition.

On the tour the next day, we were told that somebody violated a crossing line, and had his film card confiscated.

All too soon, it was time for us to leave. We had spent 8 hours going where few civilians get to go but we knew that we could come back the next day for the public tour. I wanted to be able to share with you what it was like.

The next day, we again met at Century Circle. Our tour guide was the Deputy Director of Public Affairs, Steve "Zap" Zapka. It was interesting to compare the public tour with the behind the scenes tour that we had taken the previous day. I'm glad I was able to take both.

While Haire had to continually balance Base Security requirements with constant requests from us for photos and information, Steve gave a high-energy, non-stop tour, something necessary if all the information was to be conveyed in only four hours or less.

Steve had been an in-flight photographer. He had a number of great stories about getting film of high-performance aircraft during flight test.

We again stopped first at the museum, but I'm glad I was able to have spent more time there the day before. My advice, if you want to compare Old Edwards with the current facility, spend some time doing research before your tour, then ask questions of your tour guide.

As we continued our tour, Steve kept up a running description at a pace that would put an auctioneer to shame, a ton of information about the base. The tour was limited to the main base. While we didn't have the access that we had the day before to all of the base, it was very complete, including limited flight line areas.

Cameras were prohibited on this tour. When he found out I was there to write an article about the base, he arranged an extra, a side trip to visit the restoration center where aircraft were being restored for outside display or for the proposed new museum, complete with museum staff.

We were able to get off the bus for about 20 minutes to enter the restoration hangar where several aircraft were being restored including the F-117 Stealth prototype, A3D, F3D, Cal Span A-26/B-26 Invader, P-80 Shooting Star, and the first F-16B prototype. Interesting aside, because we were near an operational area where F-22 and F-35 aircraft were located, I noticed that the hangar doors were closed behind us as we entered, for security reasons. Edwards may not be conducting X-plane trials now, but they take security seriously.

As we continued down the flight line, Steve had a word about the Flight Test function at Edwards.

During the Cold War in the late 40s, 50s and 60s, advances in aircraft capability were happening at such a rapid pace that the aircraft industry could hardly keep up. Edwards AFB research X-planes were designed to prove a specific aerodynamic concept or validate a design. They set hundreds of record.

The Air Force gave the industry a contract for hundreds of airplanes but the airplanes hadn't yet been tested operationally. The Century series of fighters is a good example. They were good airplanes but they suffered a lot of operational mishaps due to lack of prior testing and a training program for their pilots.

Testing was often done after the aircraft had become operational. The aircraft and training had to be modified. The pace was so rapid that aircraft had a relatively short operational life before they were no longer first-line aircraft.

Today, prototypes are constructed and tested, flyoffs are done, and aircraft are ready to go directly to operational status. The result is low aircraft loss rates, safer aircraft, better training, and more effective aircraft because the bugs have already been worked out, and pilots trained to maximize the effectiveness of the aircraft.

The testing isn't limited to aircraft. Today, computers aboard the aircraft have such large leaps in capability that they become obsolete in a few years, not unlike your home computer. These systems are built right into the aircraft. They must be tested as well.

Weapons must also be tested to make sure they are compatible with the changing aircraft. We saw an F-35A with a full load of weapons on one side and none on the other. Steve explained that it was testing for maximum load asymmetry, to make sure that the aircraft was controllable throughout its flight range in the most extreme loading configuration. While new X-planes are no longer being tested every year, there obviously is a lot of testing to be done and Edwards is the place to do it!

As we returned to the Main Gate to end the tour, I asked if Pancho Barnes Happy Bottom Riding Club, the off-base hangout of the test pilots was still accessible. I had looked it up on Google Earth. It was clearly visible on the phots, located just outside the Main Gate. Steve replied that it was not. After a few buildings burned, the property was acquired by the base. It was designated as a protected site with limited access. The important thing was, it's still there.

So is the 2,000 foot rocket track at North Base used by Capt. Stapp to test the limits of G-forces on humans ,with himself as the test subject, and for supersonic acceleration on the ground.

The remains of the Bell X-1 loading pit is still there, as are the runup stands for airplane rocket engines and the foundations of the Low Rent, as depicted in The Right Stuff, buildings inhabited by the pilots and families of the experimental test pilots, also known as Kerosene Flats for the pervasive smell of the kerosene heaters in the homes.

"So ugly, it's beautiful! The DeHavilland Caribou STOL aircraft was operated by the Army until a Joint Forces Agreement dictated that large military fixed-wing aircraft would be operated by the Air Force. The piston-engined Caribou could land and depart from strips as short as 600 feet.

After leaving, I had to take some solo time to reflect on the visit to Edwards. I had come to Edwards with two goals in mind, to see what goes on there today, and to try to capture the aura of what had happened there when history had been made.

I've spent a lot of time on the 100-year-old battlefields of the Somme in France. At both Edwards and those old battlefields, all traces of those earlier events had been obliterated to the eye of a casual observer, but if you know where to look, remnants of that rich history can still be found. If you are totally immersed in the Edwards experience, you can still imagine what it would be like to fly aircraft then and now to their design limit, the envelope, and beyond.

Jim Hanson has been the operator and manager at Albert Lea airport for 33 years. He has flown for 52 years and over 30,000 hours, and has flown 318 unique types of airplanes. The subtitle of this article is Ad Inexplorata but when Jim gets wrapped up in an article, it may become Ad Infinitum. Jim can be reached at his airport office at 507-373- 0608, or jimhanson@deskmedia.com