Jeff Hamiel to retire after 39 years with Metropolitan Airport Commission 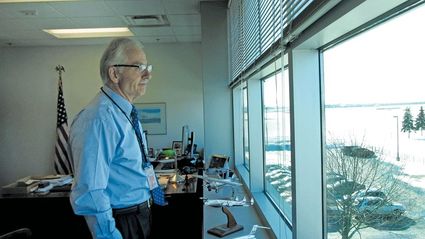 Jeff Hamiel, Executive Director and CEO of the Metropolitan Airport Commission gazes out his office window, pondering his past 39 years of service and his upcoming retirement in May.

There has been a multitude of challenges to face in the changing airline industry over the past 39 years. Such times of testing either bring one to one's knees, or build one's ability to run the gauntlet with courage and grace. Jeff Hamiel, Executive Director and CEO of the Metropolitan Airport Commission (MAC) chose the latter path in his leadership of that organization.

A partial list of Hamiel's stellar accomplishments include guiding MAC through deregulation of the airline industry in 1978, providing over $300 million in financing to Northwest Airlines in 1992, presenting a plan that led to a Legislative decision in 1996 to expand the Minneapolis St. Paul Airport (MSP) at its existing site rather than replacing it with a new airport in another location, planning and overseeing a $3 billion expansion program in 2010, developing the most extensive airport noise mitigation program in the United States, implementing historic new aviation security measures following the 9-11 terrorist attacks in New York, and conducting airline negotiations to maintain air service and related jobs following the bankruptcy of Northwest Airlines in 2005 and acquisition of Northwest by Delta Air Lines in 2008.

Yet, the man at the helm feels no need to bask in the limelight, nor to micromanage his crew.

"I've got a great staff," said Hamiel. "Overseeing this operation, which has been a absolute privilege for me, has been supplemented by this incredible staff of folks who just know what they do very well. The people I work with are passionate about the airport business. They find it interesting. It's a dynamic industry. It's always changing."

Hamiel oversees day-to-day operations of MSP and six general aviation airports: Airlake, Anoka County-Blaine, Crystal, Flying Cloud, Lake Elmo, and St. Paul Downtown. He is the first to point out that, not being ubiquitous, having capable people on staff is how it all happens.

"The real secret is, I've been fortunate enough to retain really talented people who work here," said Hamiel. "So whether you're talking about Anoka County Airport or St. Paul Downtown or MSP or any of the airports, the managers like what they are doing, and they do it very well. The reality is, I know what is going on out there, but I let people do their jobs. They are managers of airports."

That's not to say every decision every manager makes is a good one. However, Hamiel's faith in his team is strong.

"There will be an occasional mistake but that tells you they are making decisions," said Hamiel. "We learn from those decisions that may not have as welcome an outcome as we hoped. That being said, mistakes haven't happened very often."

Aside from managing a host of airports, Hamiel's other accomplishments include induction into the Minnesota Aviation Hall of Fame in 2013. What did that feel like?

"First of all, I was surprised," said Hamiel. "It was quite an honor. There are certain things you might expect or anticipate but that, I never anticipated because, quite honestly, I'm a public employee. I'm not an inventor. I'm not an entrepreneur. I'm not some guy who made a dynamic decision that revolutionized anything. I'm a public employee who was fortunate enough to fall into a place that I found extremely comfortable, working with people I enjoy. We just tried to make good decisions on behalf of the community as a whole."

Another aspect of Hall of Fame members caused the inductee thought, as well as a smile.

"I knew most people in the Hall of Fame were deceased," said Hamiel, "and I wasn't planning on dying anytime soon. I wasn't expecting the nomination but it was a real honor."

Hamiel also has military service to his credit. Born and raised in St. Paul, he attended the University of Minnesota, Duluth where he joined the ROTC, graduating with a Bachelor's Degree and as a Second Lieutenant of the Air Force. Though he spent 29 years in the military, both active and reserve, he is reticent to accept thanks for his service to his country.

"I always feel a little bad when people thank me because I loved every minute of it," said Hamiel. "It was a very enjoyable environment. I did well there. So when people thank me for my service I simply say, it was a great job for which I was paid well for doing things I loved to do, which was flying airplanes. I went all over the world, so you don't need to thank me. I need to thank you as a taxpayer for supporting the military. I think most of my military compatriots would say the same thing. It's just that simple."

Several childhood aviation centered events influenced Hamiel, leading him to pursue a life that included flying. His first airplane ride was at eight years of age after which he was compelled to ride his bike to the airport just to feel its ambiance. When he got his driver's license at age 16, his first request was to be allowed to drive to the airport.

"I drove out to the airport, walked into the terminal building, went to United Airlines ticket counter and asked if there any way I could look at the cockpit of a United Airlines airplane." said Hamiel. "They said yes!"

The young man was escorted to a United Airlines Caravel Jet where he was allowed to sit in the left seat of the cockpit.

"I sat in that airplane for 45 minutes talking with this captain," said Hamiel, reflecting on the memory. "Those days are long, long gone!"

Other days that are nostalgically rooted in the past are his early days at MAC where Hamiel started as the organizations first manager of Noise Abatement and Environmental Affairs.

"When I started working here I almost immediately felt comfortable," said Hamiel. "It was a good organization. It was small. Ray Glumack, Claude Schmidt, Bill Olson, Warren Peterson, and Scotchy Mathisen, these gentlemen were part of the greatest generation, and wonderful role models. It was enjoyable working with these guys. I also realized the career potential."

A career it became. As the good old days fell away and the potential for stress grew with each new project undertaken, the Executive Director said he still faced each morning with excitement.

"First of all, aviation is a dynamic industry," said Hamiel. "Things are always changing. Everything is always in motion. Anytime there is a downturn in the economy aviation takes a nosedive. When the economy starts to recover, it takes a giant leap forward. The volatility and the excitement of the dynamic of this industry is what keeps it so interesting."

With his impressive list of accomplishments, what project is most dear to Hamiel's heart?

"There are all sorts of things that have happened during those years that are very important, that were direction changing, situations in which I feel strongly that I made the right decision," said Hamiel, "but I think the success of the airport in our community and how it's viewed, working with a great team of people, and keeping this place serving the community's needs is the greatest success."

After 39 years, with the joy of a job well done, Hamiel is willing to walk away gracefully.

"It just seems like the right time," said Hamiel. "Things are going well. The airport's in a very good position. We've got a good staff. We've hired some new, young people who are smart, have a lot of energy, and who like this business. It's time for people like me to get out of the way and let this transition take place."

As he approaches retirement, Hamiel is also celebrating 46 years of marriage with Joan, his wife, and the raising of their children David, Julie, and Matthew who are now engaged in professional careers of their own. Husband and wife are looking forward to spending time together as a couple. 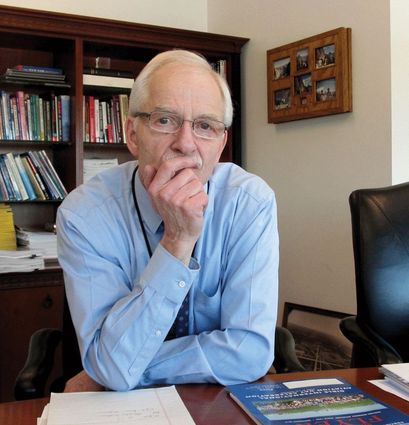 Sitting at the conference table in his office, Jeff Hamiel reflects on his career with the Metropolitan Airport Commission and his position as a public servant.

"Joan has been my partner through all this, an important piece of the whole success story," said Hamiel. "She's a remarkable person."

With nearly 9,000 hours of flying time, part of the couple's time will undoubtedly be spent in an aircraft.

"I am enjoying good health, and I've had lot of great experiences in aviation," said Hamiel, "so I'll just keep flying."

Hamiel reflects on a career that has spanned 39 years to the day he came to MAC.

"When I get in my car that last day and drive out the front gate, I want to look in my rearview may and say, I made a difference" said Hamiel. "I want to know I was able to do things that meant something to people."

With more than 35 million people traveling through MSP, and over $10 billion in annual economic activity supporting more than 76,000 area jobs, it appears as though Jeff Hamiel can retire confident that he did, in fact, make a difference.