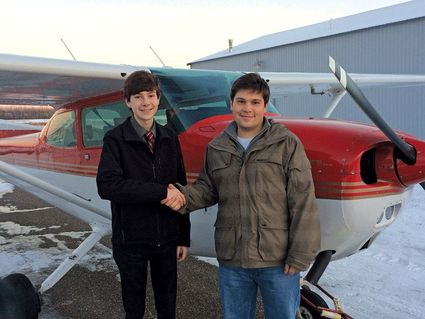 Mitchell Lindsey accepts congratulations for achieving his private pilots license from brother and flight instructor, Brandon Lindsey. The Lindsey family belongs to the Flywell Flying Club at Anoka County-Blaine Airport. Pictured here is the C172 in which Mitchell took his check ride.

How long has 17-year-old Mitchell Lindsey wanted to be a pilot?

"Since forever," said Lindsey who soloed on his sixteenth birthday and passed his private pilot check ride on his seventeenth birthday. "I've always wanted to be a pilot."

Currently a junior at Blaine High School, Lindsey's next goal is an instrument rating, though he doesn't intend to stop there. One day he envisions himself as a commercial pilot for a major air line.

His dream is very close to home. Norm Lindsey, his father, is a 757 Delta Air Line Captain with 25 years experience under his belt. Mitchell's older brother Brandon is a First Officer with Great Lakes Airlines. Both are certified flight instructors, which came in very handy for Lindsey.

"My dad and brother helped me all the way," said Lindsey. "Brandon actually signed me off for my check ride."

Working with family has the potential to go awry but that wasn't the way it was for the Lindseys. 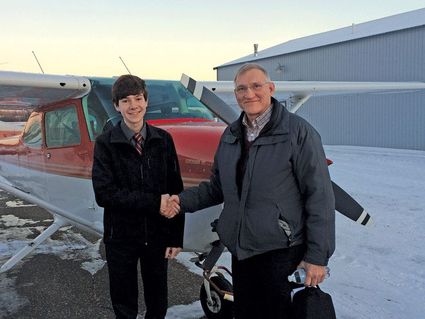 "It's quite relieving, really," said Lindsey regarding being taught by his father and brother. "I could discuss flying and learn as much as I wanted to at any time. I felt free to ask questions."

There were times all three Lindseys were in the air.

"I would sit in the back of the airplane watching my oldest instruct my youngest," said Norm Lindsey. "I was just astonished. Brandon is really a good instructor. He offered that enthusiasm and perspective that is more geared to youth. It's a thrill to watch him."

One of the differences Brandon noticed between teaching Mitchell as opposed to other students is that knowing his brother so well aided the instructing process.

"Just knowing him more showed me how he best learns," said Brandon. It made me become a better teacher as well. He is actually pretty good. He's pretty much a natural."