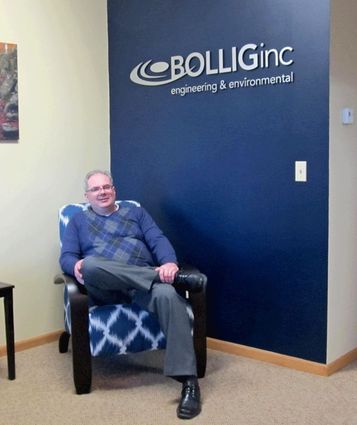 Brian Bollig relaxing for a moment at the Bollig Engineering Sartell location.

When he was in sixth grade in Willmar Elementary School, Brian Bollig knew what he wanted to be when he grew up.

"I was building dams when the snow was melting in the gutters, pushing the water different ways," said Bollig. "That's when I knew I wanted to do try to do something with water. That's where my engineering path started."

The dream never left him. In time he earned a Bachelor's Degree in Natural Sciences from St. John's University, a Civil Engineering Degree and a Masters Degree in Environmental Engineering from South Dakota State University in Brookings.

After graduation, it was off to Albuquerque, New Mexico for Bollig and his wife, Kathy whom he married while in grad school. He began working with Molzen-Corbin & Associates, "building waterways all over the state."

As time progressed, Bollig successfully applied his engineering skills with the firm. On the home front, the couple started a family. As the family grew though, so did their longing for the land of 10,000 lakes.

After six years they returned to Minnesota where Bollig engaged with another engineering firm for a couple years, after which he took the assistant City Engineer position in Willmar, his hometown. Bollig worked a 40-hour week and had plenty of time to enjoy with his wife and their family, which had grown to four children, Jacob, Hannah, Sophia, and Gabrielle. All was well...until that adventurous little boy engineer in Bollig rose up once again.

"My public sector job was interesting for a while," said Bollig, "but I just had so many ideas. I couldn't move them fast enough. They would just get stuck."

With permission from the city, he began picking up private engineering projects outside the city's jurisdiction. His creative side was satisfied and he flourished in his responsibilities with the city. Again, all was well...until he got too busy.

Eventually, after talking it over with his wife, he faced the prospect of either quitting the extra projects to keep his family a priority, or quitting the job with the city and starting his own company.

"So with four kids under the age of ten, paying $30 a month for 100 percent healthcare coverage," said Bollig, "I walked away from the city job and started my own company."

In July of 2007, Bollig Inc, doing business as Bollig Engineering, experienced its official beginning. Calling to mind the state of the economy in 2007, it could be said the little boy engineer in Bollig was leading the man in Bollig astray. As it turns out, the firm has succeeded every step of the way.

"It started essentially with just me," said Bollig. "Then I added a bookkeeper and some other staff. Today we have 16 people on staff working out of two locations, Willmar and Sartell."

To what does the business owner attribute his success? Oddly enough, that life long drive to be an engineer is only part of the reason. It was in New Mexico at the beginning of his career that the young man learned a high impact lesson, not about engineering, but about how to run a business...a lesson that remains with him to this very day. The owner of that original firm told Bollig that while engineering was indeed important, their company was continually selected for other reasons.

"I thought all engineering firms were the same but they are not," said Bollig. "They have different business philosophies. We all go to similar schools. We're all smart people. We have good ideas. We create good designs. But it's not just having a good design that makes you a worthy firm for your client. It goes beyond that. What the owner was really getting at is, your client has many other needs that go along with moving a project forward. Engineering is just one of them.

"That really hit me because I was trying to perform the best engineering possible, but if you cancel out engineering, if all engineers can bring basically the same engineering forward, then what is the differentiator after that?

"It's how you treat your clients. What do you want to establish long term with them? What is most important, their goals or your project?"

What Bollig learned at the beginning of his career is the foundation on which he built, and continues to build his business.

"Our philosophy is based on how we can help our clients meet their goals," said Bollig. "Their goals then become what we do to help."

Brooten Municipal Airport is a good example. That project began with the need to expand the industrial park.

"The industrial park is located right next to the airport so aeronautics became involved," said Bollig. "We ended up doing an airport layout plan to combine with this industrial park, the growth that they are seeing, and how this was going to tie in and fit together."

Moving the project ahead meant working with several agencies including MnDOT Aeronautics, MnDOT Highway, MnDOT Railway, the county, seeking grants and other forms of funding, and even working with legislators.

"So, with coordination of this outside participation, and some grants sprinkled in here and there, the city was able to move forward with their project," said Bollig. "A lot of excitement was created. During that process we actually had a donor come to the city wanting to leave a legacy and agreed to pay the city's portion of the remaining aeronautical costs.

"We built a beautiful terminal building for them. We also enhanced the runway lights. It's been really a dynamic project for the industrial park and for the community as a whole.

"It's really been kind of a shining star, a prime example of the type of projects we are able to do for our clients."

A very practical difference between Bollig Engineering and other firms is their involvement in client advocacy.

"Funding goes beyond grant writing," said Bollig. "It's not just writing the grant. You have to win it for your clients. It's how you do your planning and the outside support you can garner for the community. This is my forte.

"When you start your planning, you look at the needs of your client and the available funding. You merge the engineering with the funding. It's like the planning becomes an art, not just a science.

"It goes beyond just reaching an agreement, beyond grant writing. Now you have to have advocacy. You have to get other people to want to help your clients as much as you do. How does that happen?

"You have to help your client share their message with agencies and people who have the ability and resources to help.

"One of the ways we do that is going to the state capitol with our client to meet with the agencies to talk about the project."

Bollig recalls one case in which they drove over two hours one way to spend 30 seconds with a Senator in the hallway of the State Capitol. It was 30 seconds that changed the course of the project. 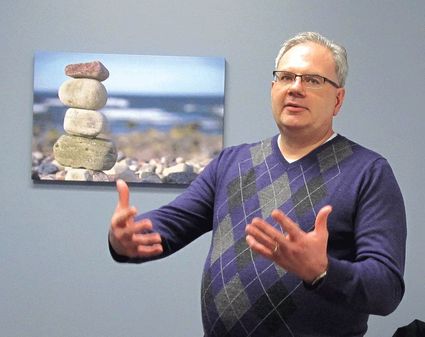 Brian Bollig engaged in an interview at the Sartell location.

"We put a considerable amount of effort and resources in planning on behalf of our clients," said Bollig. "We've been able to leverage opportunities for our clients to allow the engineering to progress as it needs to by having a good solid plan, bringing everybody together, and moving the project in the direction our client wants to move.

"God has blessed us. He's given us that talent. He's given me the opportunity to bring people on board who nurture these projects, and really enjoy it as much as I do. So, it's worked.

"Now, as we've grown as a firm, we realize we have a gift, that we can do things. But we first need to understand what people's needs are. We can't do anything for them until we understand their needs. Everything starts with a need."

In the case of the six-year-old Brian Bollig, the need was to be an engineer. What joy it is to see that dream become reality in the form of the man, Brian Bollig of Bollig Inc and his willing, very capable crew.