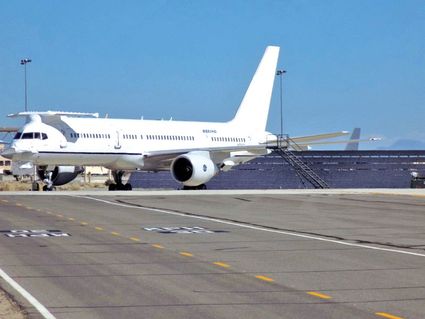 The modified Boeing 757 was nicknamed Catfish because of the overhead canard. It was reportedly used for evaluating avionics in the F-22 program.

The next day, I met Haire at Century Circle, a collection of Century Series aircraft located just outside Edward's West Gate. Haire is a retired Army Aviator, who flew Huey's, Cobras, and Chinooks. He paired us up with the Dutch photojournalists, and he asked what I wanted to see. I explained that I wanted to do an article about Edwards, then and now, the Right Stuff era, and what was happening today. He asked if I had visited Edwards before.

Back in 1981, I was living in Houston. I taught a friend to fly seaplanes and balloons, and he had given me the instructions for my Helicopter rating. His brother worked for NASA, and ran what was called Reality Systems Integration. When the Shuttle was developed, they created a full-motion simulator, complete with visual, of the entire Shuttle cockpit for training the astronauts. When Enterprise was dropped from the carrier 747, they took the telemetry data and ran it back to correct the simulator.

When Crippen and Young flew Columbia into space for the first time, they took the data from that flight and updated the simulator again, thus, Reality Systems Integration. The simulator was down for maintenance at 2 a.m. the next morning. It was running but they couldn't make use of it for a full mission training session, and needed someone to fly it. He offered. I gladly accepted! It was a fantastic 2 hours "in space."

We flew the flight profiles and used the data acquired by Columbia on its flight just two weeks before. The first Shuttle landings were at Edwards. We fired retros over Wake Island, saw the Mach meter come off the peg at Mach 28, experienced aerodynamic buffeting starting at about 350,000 feet, experience plasma flares on the windshield from the atmosphere burning, came across the California coastline at 75,000' and Mach 5, overhead Edwards at 50,000 feet and Mach 2, made a 270 degree turn, and landed on the dry lake.

At the time, they didn't use computer-generated images in the simulator for landing. Instead, they created scale models of Edwards, the lake runways and surrounding terrain on a table, and a camera gave a pilot's eye view for landing. It worked so well, the instructor asked, "Would you like to do it again?" I had two Shuttle landings at Edwards, sort of. Now, I was back on the actual site.

With that background in mind, Haire suggested that we start with the base museum. It is inside the gate, so you have to either have a base pass, or be on the public tour. It is an excellent museum with both indoor and outdoor displays.

Inside the museum was a history of the facility. Originally, the area was settled by the Corum family. As the town grew, they applied for a U.S. Post Office but Corum was too similar to another California town, so they inverted the name and called it Muroc instead. In the 1930s, it was something of a hardship post, no facilities, no permanent structures. The military lived in tents. It was so bad the facility didn't have a Commanding Officer for months. It was run instead by a Master Sergeant. Prospective Commanding Officers took one look at the facility and never came back! What Muroc did have was that wonderful Rogers Dry Lake bed, perfect not only for training, but a remote location, good flying weather, and the 44 square miles of dry lake made it a perfect spot to do experimental flight tests.

The area receives only 6 inches of rain per year, and the hard packed lakebed is smooth as glass and capable of carrying heavy loads. The maximum elevation change is only 18" in 30,000 feet. During the war, training was conducted on the south end of the lake, but a separate facility, North Base, was constructed in 1942 for testing America's first jet, the XP-59.

South Base was the site of much post-war flight testing. The facilities were described in The Right Stuff as low rent, the primitive administrative, barracks, and housing facilities that used to be a staple of military facilities. It was described by one writer as "marvels of tarpaper, wire, and wood" though many buildings were concrete.

As we moved on with our tour of the main base, there was nothing to be seen of the old facilities as depicted in the movies. Haire explained when they built this Main Base, in the 1950s, they built it as a permanent facility. Even those buildings have mainly been replaced. He was right. Anybody who was in the military in the mid-80s or earlier wouldn't recognize this as a military post. Gone are the ramshackle buildings and barracks. Today, even enlisted personnel live in condo-like apartments. The officer's homes look like any suburban subdivision. He explained that now the Air Force treats its people like the professionals that they are.

As we toured, we noticed satellite array antennas on top of several hills.

"Those are mainly for communicating with space vehicles, manned and unmanned," Haire explained. "They may be talking to the Space Station."

For a Right Stuff connection, those same antennas were part of the scene in the movie where the Australian Aboriginals were dancing in front of a fire while Gordon Cooper was talking to the Mercury capsule.

As we descended toward the dry lakebed, we saw the NASA facility, one of the few things we wouldn't be allowed to see on this private tour.

Haire explained "We used to do tours, but NASA backed away. We still help each other out when needed." He also made the comment "In recent years, NASA has been getting back into aeronautics with air-breathing aircraft, and the Air Force has an increased space presence with hypersonic and re-entry research."

I couldn't help but think that in the post-war period NACA (NASA's predecessor) was into aeronautics research before being dedicated to the space program. Times change but NASA and the Air Force remain linked. I asked how many people were on base. Haire rattled off Edwards statistics.

"There are about 13,000 to 14,000 people on base at any given time, depending on the active programs," he said. "There are about 3,000 Air Force personnel and family members, including foreign air forces, and roughly 5,000 to 6,000 Civil Service Government Civilians, as well as about an equal number of contractors for the aerospace companies. We have shops and schools here. The schools are open to area residents, and are administered by the local school districts."

As we made our way around base, there were numerous planes on poles, aircraft with an actual Edwards connection by the exact tail number. There were numerous buildings and streets honoring those who died during flight tests. We went by Ridley Mission Control. I noticed that it was festooned with antennas.

"That's for collecting data during flight test" was the explanation from Haire. "Where we used to do everything by radio. Today we have multi-channel data collection with people monitoring the different points of the test."

That saves time and money.

Haire pointed out the USAF Test Pilot's School. It's a small fraternity. It graduates about 25 test pilots per year from its year-long course.

"Those people aren't just pilots" he explained. "It's a young person's game. Most are under 30, ranked as a Major or below. They work those people hard. They have a waiver from official Air Force rest requirements. They fly all day and study at night. They graduate with a Masters in Aeronautical Engineering. Many of them have PHDs."

In looking over their stable of aircraft, I noted a number of C-12s (Beech King Air 200s).

I noted there were 4 gliders in their trailers.

"That's for teaching airmanship and for teaching ground-launching (like the Lifting Body prototypes)," said Haire. "Our test pilots fly a wide variety of aircraft including seaplanes, gliders, and older airplanes. The object is to give them the ability to evaluate aircraft they haven't flown before. They fly about 15 to 30 different types, culminating in the Vista NF-16B Fighter Performance Test.

"The VISTA test bed aircraft incorporated a multi-axis thrust vectoring engine nozzle that provides for more active control of the aircraft in a post-stall situation. The resulting aircraft is super maneuverable, retaining pitch and yaw control at angles of attack beyond the capabilities of traditional control surfaces. The VISTA program was successful but it was not tested in time for incorporation into production F-16s though the technology is included in the Short Takeoff/Vertical Landing version of America's newest fighter, the F-35 for use while hovering. The program also produced Direct Voice Input and Virtual Heads Up Display for the Lightning."

We went through the security gate and onto the flight line. Haire made arrangements for us to go out next to the active runway where we could film the workup of the new F-35 fighters. As we made our way out, we saw a strange aircraft, a Boeing technology demonstrator with a canard wing above the cockpit.

The aircraft belonged to Boeing. It could emulate the flight characteristics of a number of aircraft. We continued on the opposite side of the main runway, adjacent to the old South Base. Haire pointed out a low but wide hangar. 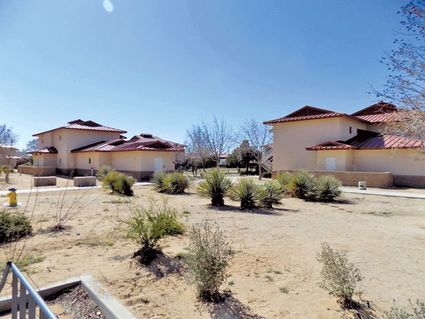 This is not your father's military housing. Barracks have beenreplaced by condo's. These are for enlisted personnel."

I was amazed that a KC-135 (Boeing 707) took only 2,000 feet to break ground on the no-wind 82 degree day, even if it was re-engined. He must have been very light. I've haven't been so close to an active runway since I was at the LSO's position on the USS Abraham Lincoln! During our time there, tower advised us of several in-flight emergencies. Though unidentified, it could have been something as innocent as a caution light, a spurious data transmission, an ordinance warning or it could have been a real emergency. It underscored the fact that this was a flight test, not operations normal.