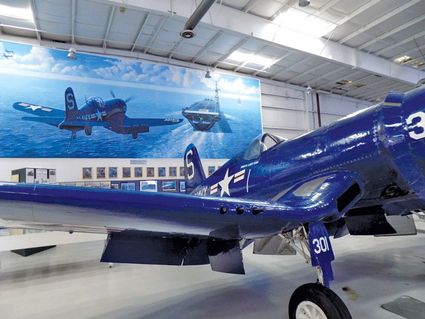 At Palm Springs Air Museum, a Corsair formerly owned by Minnesota native Bob Pond, and flown by fellow Minnesotan Kermit LaQuey, is parked in front of Stan Stokes famous painting of a Corsair coming aboard the Essex, titled Hook Down and Homeward Bound.

Most pilots of any age have had at least a fleeting desire to visit Edwards Air Force Base. During WW II, it was the site of "Special Projects" and testing. Military personnel might be aware that something secret was going on at "Muroc" as it was then called, but information was only distributed on a need-to-know basis.

During the war, flight testing was transferred from Wright-Patterson Air Force Base in Dayton, Ohio to the wide open spaces of the high desert in California. Captured enemy technology was tested there, then adopted and adapted by the U.S. military. Some was secret. Some information was carefully managed by the Air Force. For example, news of Yeager's 1947 transonic flight was withheld by the government for more than two months.

With the Cold War raging, the military recognized the benefit of publicity of these record-setting flights. It seemed that every month brought new planes and new records for flying higher, faster, and farther. Records fell so fast that new airplanes were designed, tested, produced, and became obsolete in only a few years. The public ate it all up. Test pilots were national heroes.

The Golden Age of Flight Testing culminated in the flights of the X-15 in the early 1960s. This aviation awareness by the general public was likely one of the reasons for the 1960s-1970s aviation boom. Thomas Wolfe chronicled the era in his 1979 book (and 1983 movie) The Right Stuff.

I went back to the book to see how it held up in the last 36 years. I found Wolfe had accurately portrayed the era. The film has a few historical inaccuracies, but gives a generally good portrayal. I decided to try to make a pilgrimage to Edwards myself.

Edwards conducts only one public tour per month, guiding about 40 people per tour. Tours are usually booked six months in advance, so if you want to visit during the winter months, you need to book right now.

Information on tours is available at http://www.edwards.af.mil. Tours usually start at 9 a.m. and finish by 12:30. I suggest you go to the web site. It gives good information about ID needed, and what is/isn't allowed on the tour.

You should receive an email confirmation within three days.

If you have a group and are having problems scheduling, Large Group Tours (15-40 people) can be arranged by special request. Contact Public Affairs as listed above. Get your friends together and go!

On my application, I asked to meet with a Public Affairs person to advise me on writing this article. When my confirmation arrived, it didn't mention the Public Affairs contact. I wasn't surprised. Military installations often give the Public Affairs job to a junior officer, and they often don't stay in the position long. It took me eight years and over 30 submissions to do an article on the carrier Abraham Lincoln. I called, and was pleasantly surprised to be routed directly to John Haire, Chief of Public Affairs Operations for the 412th Test Wing. He asked questions about the article, and assured me they could accommodate my requests.

The next day, he surprised me by stating, "If you can come a day early, I'm going to be working with some Dutch journalists covering the workup of Dutch Air Force F-35s. You could join us. In addition to the normal tour, we'll go out on the flight line and a viewing point right next to the runway where you can take photos."

I gladly took him up on his offer! What a delight to have a knowledgeable Public Affairs Officer who exceeds expectations!

I've found over the years that in dealing with the military, one should never be late, so I arrived in the area a day early. I spent time touring the local airports. What else would you expect an aviation journalist to do? (See sidebars to see what we found there.)

After touring the excellent, free 20 Mule Team Borax Museum and mine in the nearby town of Boron, we stopped just outside Edwards North Gate, where the famous B-52 "Balls 8" is on display. This early B-52 had been modified as a test aircraft. It launched hundreds of test vehicles, including 159 X-15 flights, in addition to lifting bodies, rockets, spin test vehicles, Pegasus direct-to-orbit rockets, and the X-43 hypersonic unmanned test craft, which achieved a speed of 9.6 Mach.

While we were visiting this historic aircraft, we experienced twin double sonic booms. Some aircraft emit a double boom, mainly due to the length of the aircraft and altitude at which it is flying. The Space Shuttle was famous for it. The fact that there were two double booms meant there were two aircraft at high altitude.

Only a couple of minutes later, we heard another sonic boom, this one a single, sharp crack like a nearby lightning strike. Later, I asked Public Affairs about the source of the booms. They confirmed that there were two F-18s, likely the double booms, and an F-16, the sharp crack on the range that day.

Most people have never heard a sonic boom. I couldn't help thinking that the sonic boom was the signature of Edwards, the place where the very first sonic boom was heard. How appropriate. This was going to be fun!

Other museums visited in southern California

Palm Springs Air Museum, Palms Springs, California. Some of the best-displayed WW II aircraft I've ever seen. They are proud to say that, unlike so many other museums, "Our airplanes fly!" Not all, but many of them are flyable. Don't miss their research library!

Gen. Patton Museum, east of Palm Springs, is the area where troops trained for desert warfare in North Africa.

Chino, California is close to LA but surrounded by cattle farms. It's a busy GA airport, with an emphasis on WW II aircraft. It is home to two great museums. It will take all day to see them both.

Planes of Fame concentrates mainly on military aircraft. It has perhaps more flyable aircraft, including a flyable version of a Northrop Flying Wing. 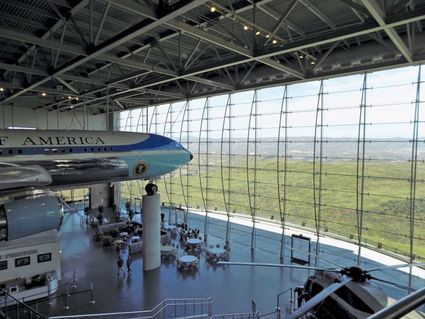 The former Air Force One Presidential and Marine One aircraft are displayed in a stunning setting at the near by Reagan Library located in Simi Valley, California.

Yanks Air Museum has a more diverse collection, with both military and civil aircraft. Both are nicely displayed, and have docents to answer your questions. At Yanks, we were looking through the restoration shop when Operations Manager Frank Wright asked if we had any questions.

I remarked that they had the skeleton of a Waco YKS-7 under construction. He replied, "You know your airplanes!" I mentioned that Gary Underland of Owatonna, Minnesota had restored a Waco found in the Canadian bush. Frank had a question about the trim system. I gave him Gary's contact information. He called him to get the answer. (Vintage aircraft restoration. It's all about the contacts!) You've got to love a museum where you can talk directly to the Operations Manager!

The Reagan Presidential Library in Simi Valley is an excellent library. The aviation showpiece is the formal Presidential 707 on display in a glass-fronted hangar. A former Marine One Presidential helicopter resides there as well.

This series continues in the February issue of the