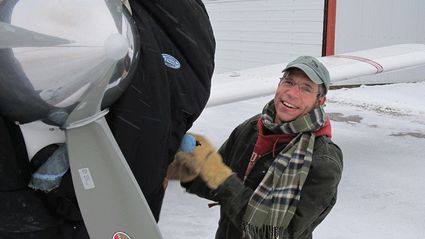 Even kneeling in the snow to properly wrap the aircraft cowling so he can head off to work for a long day doesn't diminish the satisfied smile that graces Tom Stillwell's face after he's been flying.

When he was in junior high school, Tom Stillwell wanted to become a pilot. His pursuit was delayed by one of those pesky adults in an authoritative role who told him wearing glasses would disqualify him for that position. So he did the next best thing. He became a surgeon.

It was a circuitous route, attending Hamline University, getting married, beginning a family, going to grad school at the University of Wisconsin, joining the Navy with the provision of receiving a scholarship to attend Marquette Medical School, after which he did an internship at Bethesda Naval Hospital. Another year was spent stationed at the Naval Air Station in South Weymouth, Massachusetts to fulfill an obligation of one year of general practice. It was then that he began to specialize.

"After my general medical officer year I had to find a residency program," said Stillwell. "I wanted to become a Urologist so I went to Mayo as a Urology resident for four years."

The Navy used the skills he picked up at the Mayo Clinic by assigning him to a Naval Hospital in San Diego, California as a Urology instructor for the residents for three years, at the end of which he was deployed to Desert Storm.

"I was in a MASH Hospital doing trauma surgery," said Stillwell. "It was one of the last things I thought I'd end up doing when I first signed papers to join up."

After the military service, the doctor, Virginia his wife, and their four children returned to Minnesota where he took a position at North Memorial Medical Center in Robbinsdale. His experience in the MASH unit prepared him well for his work in the trauma unit in the medical center.

About two years into his work at North Memorial an outreach coordinator approached the doctor to gauge his interest in providing urology services part time in Mora. Little did he know when he took the opportunity that Mora would also reignite his childhood dream of becoming a pilot.

"About two or three months later I was at an air show at Flying Cloud with my son," said Stillwell. "I thought to myself, I always wanted to fly. Now I have to go to this place far away. Why don't I get my pilot's license? So, it was an Ah-Ha moment. That was my epiphany to go to flight school."

Being true to his epiphany, Stillwell started training at Crystal Shamrock where he soon earned his pilots license, after which he began flying VFR to Mora. He then pursued his instrument rating. As he picked up ratings, he also engaged in more hospital outreach programs including Sandstone, Moose Lake, Grantsburg, and Onamia. What had been declared as an impossible dream turned out to be the most natural thing in all the world.

"I love to fly," said Stillwell. "I think being a pilot is part of your genetics. It's somewhere deep in you that, once it gets tapped, it's kind of hard to resist. You must feed this need. If you don't, you're not happy."

Even with all the stress in trauma units in a major medical facility, hectic schedules, and dividing time between a number of rural hospitals, the doctor is invigorated by flying...any time.

"I will fly home tonight," said Stillwell after a day that began at 5:45 a.m. and wouldn't end until after 10 p.m., "I will go up to five or six thousand feet. The stars will be above me. The lights on the ground will be absolutely drop dead gorgeous. It will be like an ethereal experience, sort of heavenly."

With schedules to keep, Stillwell always flies with a back up plan.

"This fall I had lots of IFR," said Stillwell. "Take off and you're immediately in the clouds and you don't come out of the clouds until the next airport is right in front of you. There's something very rewarding about that, and very challenging.

Of course, the experienced pilot has stories to tell, like one cold February night when he and a partner experienced an emergency moments after taking off.

"I started getting a collection of debris on the windscreen which looked a little bit like ice," said Stillwell. "I soon realized it wasn't ice. It was oil. I thought, this is a problem."

The aircraft was less than six miles out so he immediately started a 180 turn.

"At that moment the cabin started filling up with smoke," said Stillwell. "I popped the window and turned off the electricity because I thought it might be an electrical fire, which in retrospect was a mistake because I lost my GPS and lot of my panel.

"When I realized it wasn't electrical I turned the electricity back on. By then I had gotten a lot of smoke out of the cabin but oil was continuing to build up on the windscreen and the oil pressure was going down.

"This was in Benson, Minnesota. Near the airport is an enormous factory that processes turkey excrement. In doing so it produces a lot of steam so you can kind of locate the airport by the steam so I aimed for the steam.

"We did make it back. I had to slip the airplane, which means coming in sideways. I couldn't see out the front so I had to slip in to look out the side window. We got it down and taxied in.

The fire went out, by the way. The fire was oil getting spewed onto the manifold, then coming in through the air vents which were open to allow heat to come into the plane because it was so cold.

"What had happened is, there was, a horizontal piece that leads from the manifold venting tubing to the vertical piece which I had probed to clear of any ice build up."

When somebody put the cowling on, one of these flaps had been left up so the jam air was coming straight through and going right into this horizontal piece which froze it. The manifold couldn't vent, so the pressure went up and blew out the prop seal. All the oil went out the front and the propeller blew it against the windscreen.

"So that was an exciting experience."

For years Stillwell has been a member of the Minnesota Chapter of the Eighth Air Force Historic Society where he arranged an annual flight experience for World War II Veterans. Through the years it grew to over 35 pilots flying over 120 guests to aviation events arranged by supportive organizations. The project came to a natural close due to the significant aging of the Veterans.

Tom Stillwell flies from Crystal Airport to Moose Lake Airport twice a month to see patients at Mercy Hospital, only one in a list of hospitals to which the doctor flies to administer care. The photo above was taken on a wintry December day that started at 5:45 for Stillwell.

"I have five log books, almost 4,000 hours," said Stillwell. "Every new airport I fly to I take a picture.

"I very much appreciate how the communities into which I fly have dedicated resources to maintain their airports. It's not easy but it's important.

"There are several people here in Moose Lake who are especially helpful. Randy Cichy, who plows; Larry Peterson who is the airport guru; and Larry Helwig with his heated hangar who has been a big help in the winters I've been flying here."

Stillwell also encourages young people to look into the abundance of opportunities available in aviation these days. While flying is definitely fun, it ought to have a purpose to keep you flying.

"Just go for a ride," said Stillwell. "Get into an airplane. Take off from the ground. See the world from a different perspective. See if you have the flying gene."

To arrange photos and an interview for the Meet Me in Moose Lake feature, email the managing editor. charlotte@mnflyer.com