Learning to fly when the dream arrives fully matured 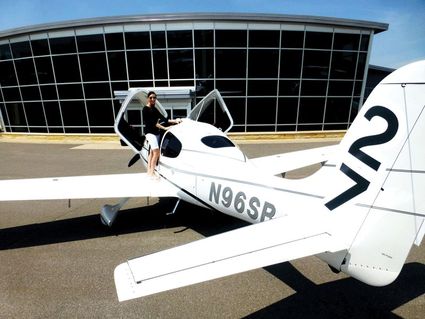 Tracy Lovness checks the race numbers she and Pat Kluempke, her husband and aircraft co-owner, applied to their Cirrus SR22T at Kay Air, Anoka County Blaine Airport where the aircraft is hangared. Lovness flew the June 2015 Air Race Classic, her third in that category.

Tracy Lovness packs an impressive amount of passion into her flying experience. Commonly, the story about how one becomes a pilot originates with a childhood dream. Lovness breaks that norm.

Born, raised, and still based in Stillwater Minnesota just three miles from the home in which she grew up, Lovness began her flying career as an adult. All it took was one demo ride to realize her life was about to change.

"It was a perfect summer day," said Lovness. "The instructor flew over our house so I got engaged in recognizing the scenery and seeing where everything is. By the time we landed, I was hooked.

"That week, I went in for my medical, then went back to the airport, signed up, and started taking lessons with a young woman fresh out of college. Within that year, I had my private pilot's certificate.

"Then, since I was already in schooling mode, I immediately went on for my instrument rating. After that, I got my seaplane rating, then went on to get my tail wheel endorsement, so the learning never stops.

"It's quite exciting actually, to be able to enjoy it so much. I think a lot of that comes because, at this age, I am totally engaged and fully immersed in what I'm trying to do. It takes a lot of energy but I've got the energy that I want to put into it."

As Lovness experienced the joy of flying and attaining her goals, her husband Pat Kluempke became more than an interested observer.

"My husband had taken flying lessons out of Lake Elmo probably twenty-some years earlier," said Lovness. "He soloed but never followed that through to certification. I was always envious but didn't have quite the desire he had at that time. Then, for some reason, in the fall of 2000 I wanted to pursue flying. Pat was encouraging me the whole time. He followed right along in the training. Then, he just did a turnabout and said, 'Okay. Well, I better follow suit.'"

"Now he is really enthusiastic about it," said Lovness. "It really helps each of us to have a co-pilot every where we go, someone to bounce questions off."

As they pursued their pilot's status and additional ratings, Lovness and Kluempke were also in search of an aircraft.

"In 2002, when Cirrus came out with the glass panel cockpit, they featured it at Oshkosh," said Lovness. "We saw it. That was instantly something my husband wanted. I wanted things like the Traffic Advisory System (TAS) and inadvertent ice protection (TKS). I also wanted the real time weather feature. There were different things I wanted but he pretty much just wanted that glass panel."

Cirrus worked with the couple to provide features each wanted for their own comfort level. In 2003 they took possession of their new SR22.

"That is the plane we spent most of our flying hours in," said Lovness. "When you own one plane, that helps increase the comfort factor. Now, years later, we still own the same plane. We've had it refurbished, new paint, new interior, new avionics and such. Rather than buy a new one, we just thought we would refurbish the one we have. It's really a great airplane."So, wife and husband had an aircraft in which they were comfortable. They obtained the proper licenses, certifications and endorsements. Then, something unexpected, though quite common among new pilots happened.

"When I was taking lessons, I had the protection of my flight instructor," said Lovness. "She had seen me through private and instrument ratings. I had so much encouragement from her. Suddenly, once I had my license, I was left alone. That was very traumatic for me."

Actual trauma did not have time to set in for the Lovness. As soon as she realized what was making her uncomfortable, she took action.

"I knew I had to start flying more, and to more places," said Lovness, "so I flew. My very first overnight was to Minot, North Dakota, which was quite a distance for me but that gave me encouragement.

"Still, I found I wasn't flying as much as I should, only because nothing was as it should be. The winds were never as predicted, never as forecast. So I would approach my airport and the winds were much different, much gustier, crosswinds, rain, thunderstorms. It became a discomfort for me to fly too far because of the weather."

The budding pilot refused to let trepidation have its way with her.

"Little by little I just started flying more, for longer distances," said Lovness. "Pat and I were married in Alaska so we've gone back there frequently. We sometimes cross through the territories of Canada and sometimes through the Inland Passage. We'll go up one way and come back the other so that's been fun. We've also been out to the east side of Canada and back, throughout Ottawa, and of course Toronto, and coming down through New York."

The couple also took advanced pilot training from Cirrus. When on trips, they alternated right and left seats so each would get proficient at the tasks managed in those position. As they built hours, they also built confidence.

"Flying is much, much better now," said Lovness. "Switching between the left and the right seat keeps us both fresh. I think that's imperative. Now I think it's equalized."

As her confidence grew with experience, the time came to find new adventures.

Lovness had been receiving postcards announcing the Air Race Classic organized by the 99s, an international organization of women pilots. (See side bar.) The race consists of teams of at least two women pilots flying VFR, daylight hours only, over four days. Each aircraft makes flybys at eight or nine specific timing points en route. The race route changes each year but is approximately 2,400 statute miles in length. (www.airraceclassic.org)

"It was always so exciting to think about," said Lovness. "I had looked at that postcard longingly for quite a while. In 2011, I had reached a point where I thought, I can do this."

She was right. Lovness now has three Air Race Classics under her belt.

"Every race is such an unbelievable experience!" said Lovness. "There is just no denying that when you fly across country, you learn so much! You get to see so many different places. The women who participate are so interesting. I'm already looking for a race partner for next year. I love to race!"

Lovness is also a member of Women in Aviation, (See side bar.)

"I found both organizations to be helpful in promoting women through scholarships, extra ratings, and in many ways encouraging women of all ages to keep actively involved in aviation," said Lovness. "If you have a goal, they are going support your getting there.

"Historically, women haven't been well received in aviation. I really appreciate seeing women of today in more respected aviation careers, like Kristi Rollag Wangstad at AirSpace Minnesota. We've come a long way from the times when women weren't expected to fly but I think we could be doing even more.

"While I am a member of these wonderful organizations, the way I think I make the most impact is actually getting out there to fly." 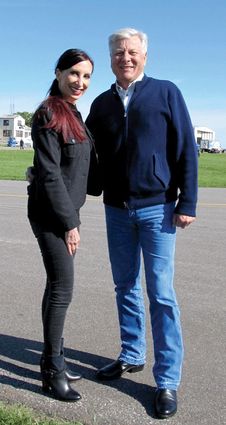 Tracy Lovness and Pat Kluempke, husband and fellow pilot enjoy a day of sunshine during an aviation event at Anoka County Blaine Airport.

The Ninety-Nines is the international organization of women pilots that promotes advancement of aviation through education, scholarships, and mutual support while honoring our unique history and sharing our passion for flight.

Established in 1929 by 99 women pilots, the members of The Ninety-Nines, Inc., International Organization of Women Pilots, are represented in all areas of aviation today. And, to quote Amelia, fly “for the fun of it!”

Women in Aviation, International is a nonprofit 501(C)(3) organization dedicated to providing networking, education, mentoring and scholarship opportunities for women (and men) who are striving for challenging and fulfilling careers in the aviation and aerospace industries.