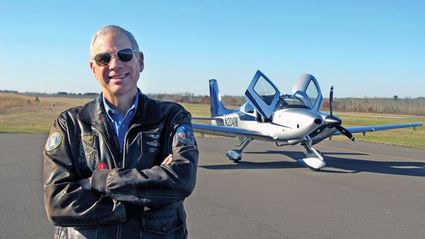 Gary Black, Cirrus Regional Sales Director, Great Plains graciously flew from Duluth to Moose Lake for an interview and photo op for the new Minnesota Flyer feature, Meet Me in Moose Lake. A much appreciated bonus was a discovery flight. From the passenger's point of view, this 2015 Cirrus SR22T is an absolute creature comfort.

Gary Black is the kind of pilot who doesn't take anything for granted. Though his vast flying experience could easily create overconfidence, Black remains steadfastly faithful to the rules of flight.

"We're going to start going through the checklist," said Black as the doors close on the 2015 Cirrus SR22T for a flight from Moose Lake Airport to Anoka County Blaine Airport. "We do have a parachute on board for the whole aircraft. The safety pin is pulled out so the parachute is armed in case of an emergency. We have beautiful weather, and I am qualified to fly in it. Everybody's well. We have plenty of fuel. We can safely do this flight."

Peace reigns in the Cirrus. How could it be otherwise sitting next to a pilot whose experience includes launching off Naval aircraft carriers at 0300 hours, flying hundreds of miles in the dark, risking getting shot at, then returning safely...every time?

Of course, Black's experience didn't start there. He went to college with an Air Force ROTC four-year scholarship. When he got commissioned it turned out that his athletic heartbeat was too low to fly Air Force fighters so he switched to the Navy. He trained in Pensacola at the Aviation Officer Candidate School, the same one as in the movie, An Officer and a Gentleman. No doubt he fit in perfectly.

After finishing in the top of his class, Black then attended Naval Flight Officer School where he flew T-2 Buckeyes, TA-4 Skyhawks, and T-39 Sabreliners. At the Naval Air Station Miramar in San Diego, he flew F-14 Tomcats as a Radar Intercept Officer (RIO).

Between two nine-month at-sea deployments with VF-213, Black worked on his instrument and commercial ratings and attended TOPGUN. While shore-based, next at the U.S. Naval Academy, he earned his Flight Instructor and floatplane ratings. More at-sea time was spent on the USS MIDWAY (CV41) out of Naval Station Yokosuka, Japan where he flew F-4s, EA-6s, E-2s, and SH-3 helicopters. He also did some civilian flying at the bases in T-34s.

He studied at the Naval Postgraduate School in Monterey, California for his Masters of Aerospace Engineering, and completed a short course at National Test Pilot School. His next assignment was as Training Officer on a Pre-commissioning crew, building the aircraft carrier, the USS GEORGE WASHINGTON (CVN73) where he also trained 5,000 sailors and officers. His twilight tour in the Navy was in Washington D.C. designing stealth and survivability for the F-18 Hornet.

Flying, instructing, and engineering aren't the only areas in which Black excels. He's been joyfully married for 35 years.

"I met my future wife in Air Force ROTC," said Black. She was a freshman when I was a senior, so we dated for four more years to see if we could survive the cruises and separations."

The couple did more than survive. They thrived. He and Celeste Curley-Black have two daughters, Amelia and Jacque, both named after celebrated pilots. The couple also purchased a 1951 Bellanca tail dragger to feed their fondness for general aviation. Upon retiring from the armed services, Black became a test pilot for Maule Aircraft where he also ended up selling 40 of their airplanes. He also flew as a test pilot for Piper and Socata Aircraft.

Cirrus Aircraft had long been on Black's radar so when an opening became available at the company, it didn't go unnoticed.

"It was the people," said Black. "They are so visionary, so enthusiastic about innovating general aviation to make it safer and more comfortable. They have young, revolutionary minds. They are very family oriented. I knew this was the future of general aviation."

"My first job was to write a test plan for testing a whole-airplane parachute system," said Black. "Here we are 18 years later and loving every minute of it."

Over time, Black moved into sales of Cirrus aircraft. He is now Regional Sales Director, Great Plains. Celeste has provided him with one of his best sales stories. 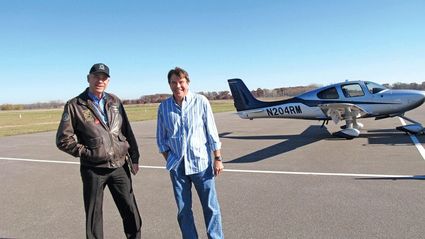 Gary Black and Bill Hawkins, president and founder of Powerwave Marketing Group based in Minneapolis make their first acquaintance on the tarmac at Key Air, Anoka County Blaine Airport. Black says a huge plus to owning an aircraft is the ability to take advantage of an opportunity to meet a high impact entrepreneur for a power lunch over 140 miles from one's home base, yet return safe and sound by mid-afternoon.

"We owned a Bellanca Cruisemaster for 17 years, which we really enjoyed," said Black. "Once my wife flew in a Cirrus she told me, 'I would travel with you a lot more if we could fly this.'"

While the little truism generates a smile for those hearing the story, Black is sincere in what family flying means to him.

"We will never have more time in our lives, so anything we can do to use time more efficiently, we ought to do it," said Black. "I think flying a Cirrus allows more time to see your parents, your kids, and travel with family more often. Another benefit is, as your business increases, you actually haver more flying time with clients and family."

With so many hours in the air, does flying ever become ho hum to the experienced pilot?

"No," said Black. "I absolutely love flying. Part of what makes it so enjoyable is meeting new people every day, taking them for a flight, and having them leave the airplane smiling."

With a pilot possessing the wealth of experience and solid character of Gary Black, flying an aircraft created by Cirrus, it only stands to reason that a passenger would depart from that flight with a pleased look, treasured memory, and an urge to tell the story.