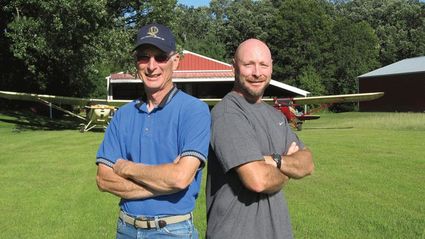 Bob Heavirland flies a 1948, Aeronca 11CC Super Chief. Patrick, his son, flies a 1946 Aeronca 11AC Chief. Both aircraft cozy into a hangar on Bob's farm, ready to taxi out to the grass strip for departure whenever the spirit moves the father son team.

As a very young boy living on a farm in South Dakota, Bob Heavirland sometimes scrambled up a 12-foot snow bank to retrieve the week's mail, wrapped in butcher paper, air dropped from the open window of an Aeronca Champ. Mail from the next town was delivered the same way in a 1948 Aeronca Super Chief. The young boy never dreamed one day he'd own that exact Super Chief.

Heavirland explained that, in those days, before the myriad of aircraft regulations we know today, airplanes owned by farmers were considered a tool, in the same league as other farm equipment. One did not need a license to fly. One simply flew. If the combine broke down in the middle of a field, the aircraft owner jumped into his plane, flew to town, picked up a replacement part, flew back to the field, made the repair, and continued working until the sun went down. It was that kind of an era.

One winter of extraordinary snowfall stands out in Heavirland's memory; the winter snow piled up over telephone wires. The two pilots varried use of their planes.

"They flew a lot of mercy flights that winter," said Heavirland. "When people got sick, they would fly them to the hospital. You have to remember snowmobiles hadn't been invented yet.

"They flew the teacher to the one-room schoolhouse, weather permitting. If the weather was bad, they taxied on the roads over the snow with the airplane on skis to get the schoolteacher there. Then they would go pick up the kids and bring themo the school house. At the end of the day, they would do the same thing in reverse to take them all home."

One story in the Aeronca Chief's past is particularly dear to the present owner. It involves the previous owners, a husband-wife team, a snowy winter, and a baby girl soon to come into the world.

"They had skis on the airplane so the husband flew to Huron South Dakota and left his wife there," said Heavirland. "The wife had the baby. Two weeks later he flew back. They took warm blankets to wrap the baby in as they flew back. I heard the story from the mother and also from the daughter who told me, 'My first ride was in that airplane.'"

The Aeronca Super Chief now nestles comfortably in a home hangar in rural North Branch with a grass strip for takeoff, a prerequisite for purchasing the property in 1991. As fate would have it, right beside the Chief sits a 1946 Aeronca Chief, owned by Pat Heavirland, Bob's son who happened to be just a baby when he had is first airplane ride.

"I grew up flying," said Pat. "I used to sit on Dad's lap and fly. We'd play Tic Tac Toe on his clipboard, flying out to Huron, South Dakota to see my grandparents. It's in our blood I guess."

Pat not only grew up flying, but working on airplanes as well. It was while working on the Chief with his dad, under the tutelage and with the support of Dean Griswold, an A&P mechanic and good friend of the Heavirland's, that Pat made the purchase of his aircraft.

Both Aeroncas made the rounds between the Heavirland's and Griswold's workspace as they underwent refurbishing and rebuilding. While father and son have the same love and respect for their aircraft, they have different ideas for the finished product.

"I have a good radio in mine and we're going to put a good, removable radio in Dad's, too," said Pat, "but Dad is more of a purist. I swear if he could have figured out a way to put the cow manure on the bottom of his plane from the field he was flying out of when he bought it in South Dakota, he would have.

"I am less of a purist. I am more of a retro rod. I want it to look vintage but I'm okay with putting hydraulic brakes on it and some more modern comforts."

A good natured competition presented itself as the team worked to complete their aircraft. Pat set a goal of having his airplane ready to fly to Oshkosh in 2013. From time to time, he told his dad he was going to finish his plane first.

When Heavirland saw the truth in his son's words, he did the only thing a pilot dad could do. He quit his job so he could finish work on his airplane. 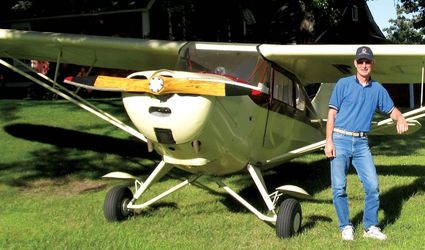 Bob Heavirland leans into his restored 1948 Aeronca Super Chief in the back yard of a farm he bought with the prerequisite of the property being suitable for a grass airstrip. It is powered by an 85 hp engine.

"I was sixty-six and a half so I had reached full retirement age," said Heavirland, "They didn't want to give me the month off I needed so I just took off. I retired on the fifth of July. Oshkosh was the twenty-seventh of July. In the mean time, I put my airplane back together, had it inspected, signed off, test flew it, and we were ready to go to Oshkosh."

Many treasured memories were made on the trip. Others were shared by folks attending Oshkosh that year, including people who knew that specific Super Chief personally. With such a full, rich past, it is no wonder Heavirland has the feeling he does about the aircraft.

"I call it my airplane but, if you look at it," said Heavirland, "I'm really just a caretaker because when I'm gone, if I've done my job right, that airplane is still going to be flying, and someone else is going to be having fun at it, just like I have as the second owner of this airplane."