Airport of the Month: Bigfork 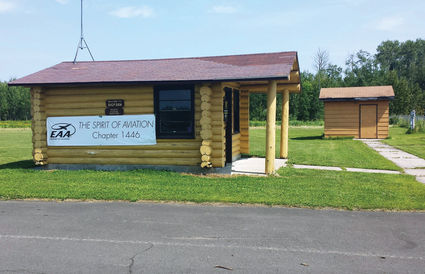 Bigfork likes to keep ahead of the trends. In 1944 aviation in the United States was focused on winning World War II and General Aviation was not getting much attention. But, in Bigfork the Village Council was thinking ahead to how an airport would benefit their town after the war was won. At the February 8th meeting a committee was appointed to keep the council and citizens "air minded." They did that and by November an application had been submitted to the Minnesota Commissioner of Aeronautics requesting approval of the site chosen for a new airport. Approval would have to wait for the war's end, but the Army Air Force arranged to keep aviation in the local headlines.

On July 14, 1945 a B-29 took off from Pyote, Texas to make a practice bomb run on Duluth. As the big bomber turned west from Duluth the flight engineer started a fuel transfer and began smelling fumes. Pretty soon the crew was woozy, but the engineer couldn't find the leak. Fearing an explosion the aircraft commander ordered the crew to "bail out."

Everyone made it safely, but they were scattered over a large area of Itasca County just south of Bigfork. By the next day all 11 had been retrieved, but two that had to spend the night outside climbed trees to be safe from the local wildlife. No explosion was heard by anyone, nor was any trace of the airplane ever found.

By November 1946, the site for the Bigfork Airport was approved and buying property was underway. After much paper work, a construction contract for $12,861.80 was awarded on March 22, 1949 to build a turf runway. Bigfork was in the airport business.

Lights were added in 1980 and in 1990 the runway was extended and paved, but things had gotten more expensive and that improvement cost $1 million. In 2009 another improvement project result in the current 4000 foot runway. Airport facilities include an automated weather station (AWOS) and a communications outlet (RCO).

The weather isn't always perfect so there's GPS approaches. If you're an instrument instructor with a sadistic streak, there's also a Non-Directional Beacon (NDB) approach. Bigfork is definitely "up north", and advertises itself as "An Edge of the Wilderness Community." In keeping with that theme, a cool log building houses the pilot's lounge and briefing area. Once the airplane is secured, ground transportation is available from Arrowhead Transit. A fuel facility is on the city's wish list, but for now make sure you come with enough gas for the next leg.

Bigfork is definitely a logging town. Logging was going on when the village was incorporated in 1907 and the forest products are still very much part of the local economy. Those "air minded" prophets of 1944 proved to be right about the airport. It was instrumental in attracting a major manufacturer of electronics to Bigfork, and supports tourism very nicely.

There's a lot to do around town which might include a round or two at the "Edge of the Wilderness Golf Course." Boating, canoeing, swimming, snow mobiles, cross country skiing, and fishing are popular activities. For the "hundred dollar hamburger" crowd there's some good restaurants downtown plus a choice of three hotels for over-night stays.

The Edge Center for the Arts advertises itself as "wildly unexpected.". Located in the Bigfork School it has a top quality gallery. The restored theatre at the "Edge" features live entertainment and shows classic movies. "Kiosk Park" on the north end of Main Street displays the work of local artist, Gene Madsen. Some of Gene's paintings depict aviation and related events. That's appropriate because Gene's a pilot and a founding member of the Bigfork Flying Club.

"Wilderness Days" (is there some kind of recurring theme here?) is Bigfork's celebration and is held on the second Saturday in June. There's a parade, music, entertainment, food, craft vendors and a beer garden.

During the last full weekend in July, the airport hosts a fly-in breakfast that's a benefit for the Lions Club. The fly-in is the same weekend as the "North Star Stampede" in nearby Effie, so you can eat pancakes before the rodeo.

Folks have been flying to Bigfork for a long time. Thanks to the "air minded" visionaries of 1944, landing at the Bigfork Municipal Airport is now an option instead of using parachutes like the B-29 crew did.