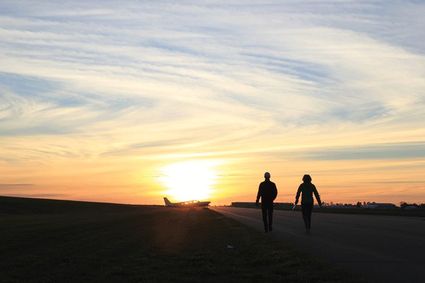 Sunrise brought light and the promise of a beautiful day for the Twelfth Annual Flying Cloud Air Tour, sponsored by InFlight Pilot Training.

There are any number of reasons the Twelfth Annual Flying Cloud Air Tour, (affectionately know by participants as the Ben McQuillan Air Tour) was such a wild success. The combination of Nerf Ball Drop, Madeline Island destination, beautiful though windy weather, and camaraderie of over 40 pilots and their passengers was the stuff of which treasured memories are made.

Award winning, professional pilot and air tour planner Ben McQuillan, CFI, CFII, MEI started the event with a briefing a few days before the trip. The briefing was taped for those who were unable to be there in person.

Saturday, October 10 dawned crisp but promising as aircraft gathered at Flying Cloud for the tour. McQuillan, the go-to man for last minute questions and guidance, had actually been planning the Twelfth Annual Air Tour just about the time he landed after the Eleventh Annual.

The very first air tour actually came about when McQuillan was working as a flight instructor at Flying Cloud years ago. He wearied of people getting their pilot's licenses then not using them. He approached management about the idea of an air tour and was told to run with it.

"The first year we had 10 airplanes," said McQuillan, "just some friends, people I knew, former students. It's caught on since then. Here we are with 38 airplanes this morning, which is our third largest in 12 years. It's kind of hit a critical mass it seems and a lot of popularity. I'd say about 45 percent of the folks on board have flown before. We tend to have a few new folks every year."

The tour is very well coordinated.

"It's easier than it sounds when you take traffic separation into account," said McQuillan. "Our biggest focus is safety, how we structure and design the lineup. I try to get about the slowest 20 percent of the group lined up, fastest to slowest within their own group. We call that the head start group or a leapfrog group. They are layered in altitudes. They launch first.

Altitude is another protective measure the organizer takes into account.

"Aircraft are layered in altitudes from 3,500 up to 6,500 today because of the weather," said McQuillan, "the cloud base will allow us to do that. By virtue of that fastest to slowest organization, they stretch out as the flight goes on. Everybody's got 300 to 500 feet of separation so it works great that way."

Planning for arrival at the airport takes more organizational skills.

It was an enthusiastic group that set out on the Twelfth Annual Flying Cloud Air Tour Saturday, October 10 on their way to the Nerf Ball Drop, then on to lunch at Madeline Island.

"We do jam up a little bit when we get to airports," said McQuillan. "We're ready for that, so that's part of the fun. It's hectic, but it tests pilot's mettle a bit. It's great practice and it's nothing they haven't done at busy, non-towered airports already."

"We're doing a Nerf Ball Drop at a private airstrip owned by Darrel Mork and Kay Cummings in Webster, Wisconsin," said McQuillan. "They donated the use of their strip. They'll have several friends and one local individual who will be judging the competition. We're not landing. We're just dropping our stuff and hitting the road."

With the uncontested success of the Twelfth Annual Flying Cloud Air Tour, it would seem that those who want to join the Thirteenth Annual better do what Ben McQuillan does, start planning now.

Congratulations to Nerf Ball Drop winner James Hennen in his Cherokee 6 from Crystal airport! You're on for 2016!