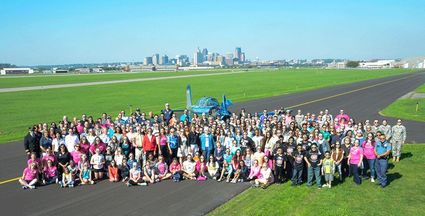 Minnesota held the largest gathering of all worldwide events celebrating Girls International Aviation Day September 26, 2015. Over 1,000 attendees gathered at holman Field, Downtown St. Paul Airport, organized by Stars of the North, the Minnesota Chapter of Women in Aviation, and AirSpace Minnesota. The crowd donned aviator glasses, supplied by AirSpace Minnesota, and gathered in front of Julie Clark's T-34 for this photo.

Girls International Aviation Day was celebrated worldwide. The September 26 event at Downtown St. Paul Airport's Holman Field was the largest gathering of all those held. Stars of the North, the Minnesota Chapter of Women in Aviation, and AirSpace Minnesota organized the gathering. Attendance was estimated at 1,000.

Resources were available at booths in the hangar representing colleges, flight schools, and aviation related businesses.

Young Eagle rides were given to 213 girls.

Attendees were given the opportunity to meet with a star-studded lineup of women who paved the way for women in Aviation. (See photo to the right.)

In a combined panel discussion/question and answer period, these high achieving women made the following inspirational comments to their audience of young listeners. 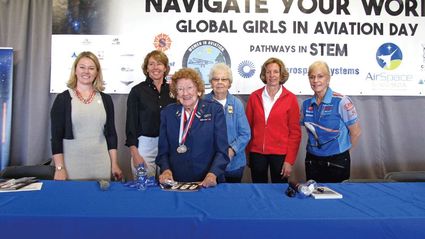 Anne Billingsley Kerr, "Don't be afraid to take risks. I've made mistakes but I've learned from them."

Julie Clark, "Don't let other people get you off track. If you can dream it, you can do it."

Barb Wiley, quoting her father's advice, "Do what you have to do to follow your dream."

Elizabeth Bierman, "You don't have to be a genius. You have to study hard and work hard."

Elizabeth Strohfus, "I want to die with my shoes on and my mouth open."

What was the high point of your career?

Dr. Sandy Magnus, "I have to say it. Being off the planet, looking down at it. It's beautiful."

Each of the women on the panel and many young girls in the audience agreed upon a comment made passionately by Elizabeth Strohfus.

Next year's Girls International Aviation Day is set for September 24.