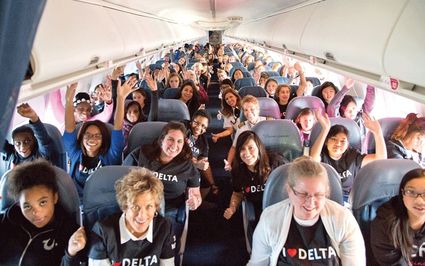 Over 120 girls, happy to be a part of the Next Generation WING Flight, an inspiring gift from Delta Air Lines.

If proof is needed to show how sincere a company is about encouraging women to consider a career in aviation, Delta Air Lines has it. On Saturday, September 26, Delta held their first ever Women Inspiring our Next Generation (WING) Flight to the Seattle Museum of Flight. The WING Flight was a gift to just over 120 girls.

Each organization was responsible for the criteria the girls were to meet to be eligible for the flight, which was sponsored by Delta Air Lines. The Seattle Museum of Flight in Washington offered discounted tickets to tour the museum, see a 3-D movie about aviation.

"We want the girls to know they can do whatever they want in life," said Rohlfing. "They can set their goals high. It's attainable for them. We want to encourage girls to go after their dreams."

A brief interview with several of the passengers as they gathered for the flight resulted in discovering grateful attitudes.

"I am really grateful that I have this opportunity," said Jackie Brooks, a 16-year-old from Anoka. "I think it's very cool that I can bring my sister along, too. I thank everybody at the ACE Camp for setting this up for me." 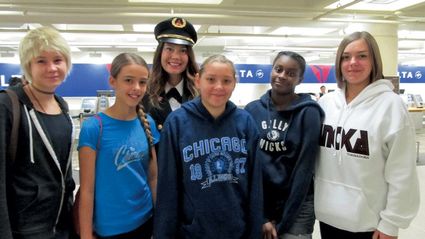 "I would love to thank Cheri Rohlfing for all her hard work and all she's done," said Sierra Schaefer, a 16-year-old from Mankato. "I know it's hard with having three kids and still being able to plan all this. I'm really glad she gave me the opportunity to do this." For some of the girls, the flight was their first. For others, it was an experience to be added to their repertoire of flight.

"The Museum of Flight made arrangements for two female astronauts and 12 NASA engineers to participate in Speed Mentoring after lunch," said Rohlfing. "It was fantastic!"

"They will got to see many women doing amazing things in aviation on this trip," said Rohlfing. "We even had Joy Walker, the first female pilot ever hired by Delta on the flight. She was amazing. I want all that the girls experienced that day to encourage them."

Expressions on the girls faces are proof that is exactly what happened.