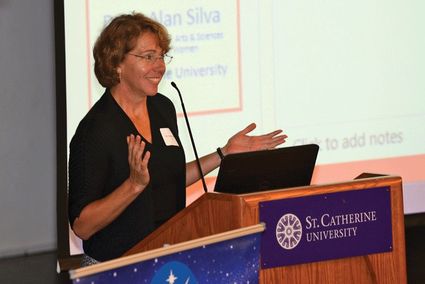 Power exuded from the Jeanne D'Arc Auditorium at St. Catherine University the afternoon of September 25 in the form of presentations and panel discussions on aerospace. The high-end team of experts was brought together by AirSpace Minnesota.

"We organized this leadership dialogue to showcase the breadth of opportunities happening right now in the aerospace industry," said Kristi Rollag Wangstad, AirSpace Minnesota president. "Historically Minnesota has an established base in this field. Each member of this panel focused on encouraging young people to continue Minnesota's legacy of involvement, innovation, and action."

"Aerospace is many things," said Olson. "The lines are beginning to blur between industries. It is a bright and rosy future." 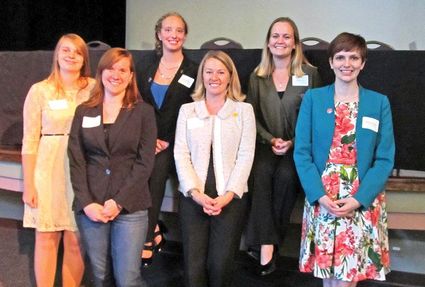 Though each panel member represented a specific business, common themes arose, including the importance of inspiring and nurturing the future work force, beginning as early as kindergarten, particularly with hands-on technology and projects. Setting goals, working hard, and gathering a support network were other concepts repeated by many panel members.

"A lot of young people fail once, then give up," said Bierman. "We tell young people failure is just that you tried it one way. It didn't go the way you thought it would, so let's try again a different way."

With so many demands to fill the work force now and into the future, the Keynote speaker encouraged those who attended the panel discussion to become more aware of the opportunities in aerospace and to press fearlessly into them.