Airport of the Month: Worthington 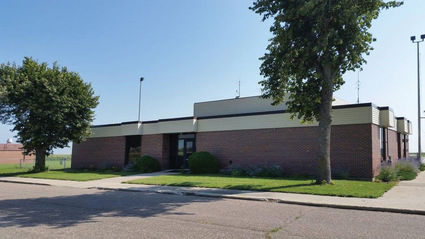 Lake Okabena figures prominently in the history of Worthington. Nineteenth century railroads needed a lot of water. Steam locomotives pulled the trains and the early ones needed to refill their water supply regularly.

A 785-acre lake would make an ideal watering stop and the Chicago and Northwestern Railroad established Okabena Station for that purpose. By 1907, steam engine technology had improved and water stops weren't needed as often. The lake became more of a tourist attraction. Amelia Earhart spent her summer vacation at Okabena that year, as well as four subsequent ones. Amelia was 10 at the time and she was already pioneering, but it was athletics for girls, not aviation. Amelia was a well-known basketball and baseball player around Worthington. Later she was a member of one of the first girls' basketball teams at the St. Paul Central High School.

Aviation did come to Worthington until the late 1930's when an airport was established where I-90 now passes the city. A light beacon was installed on top of the Nobles County Courthouse to guide pilots to the airport. Worthington Junior College (now Minnesota West Community and Technical College) operated a Civilian Pilot Training (CPT) program there during World War II. The airport was moved to the current location after the war and dedicated in 1947. From 1969 to 1985, Worthington was part of the route system for North Central Airlines, and then part of the Essential Air Service (EAS) program until 1992.

In the 21st century Worthington Airport has since remade itself as a center for business aviation with 5500-foot primary runway that's equipped with an Instrument Landing System (ILS). There's also a paved and lighted secondary runway, full taxiway system, plus plenty of ramp space for parking. Heated hangar storage is available and the newly remodeled Arrival/Departure building is open 24 hours. Self-service fueling is available offering both Jet and Avgas.

Integrity Aviation is Worthington's full service Fixed Base Operator (FBO), where you can get aircraft maintenance, rent an airplane and do flight training. Taxis and rental cars can be had to get you around town. A weather station (AWOS) and communications outlet (RCO) are both on the field.

Okabena Station was renamed in 1872 as a result of the arrival of two developers from Ohio. Worthington was the maiden name of the mother-in-law of one of the developers, although what motivated him to name the town after her is lost to history. The developers advocated "Temperance" with a "Capital T", but that only lasted until the 4th of July when a keg of beer was set up for the celebration. After the first keg was smashed by one of the advocates, a second was obtained and that ended the local temperance movement.

Today there's some really good (and surprisingly diverse) eating places in Worthington many of which serve cocktails. Imbibing would (naturally) require an overnight stay in one of the city's nice hotels, or bed and breakfast places. "Underwing" camping is allowed on the airport so you could also sleep it off next to your airplane.

One B&B is the former home of George Dayton, founder of the department store chain that later evolved into "Target." Dayton was the son of an abolitionist and his family operated a station for the Underground Railroad in Clifton Springs, NY prior to the Civil War. Dayton arrived in Worthington in 1883 after investing in farm mortgages and became a local banker. He acquired the first "Dayton's" store as a result of a foreclosure and left Worthington in 1902 for Minneapolis and the retail business.

In the Dakota language, Okabena means "home of the heron", and much of the shore line is protected habitat. Today the lake is entirely within the Worthington city limits and the former railroad station site is a city beach that hosts an annual wind surfing regatta. Nine more of the City's 20 parks are also on the lake shore. There's a music festival to go with the regatta and the City's fall festival is "King Turkey Days". There's two first class golf courses in town or you can take in one of the regular concerts at Chautauqua Park Band Shell or in Memorial Auditorium.

Unlike many rural Minnesota Communities, Worthington has experienced significant gains in population over the last 20 years. It's a community that actively courts economic development and knows how to leverage their first class airport to get things done.