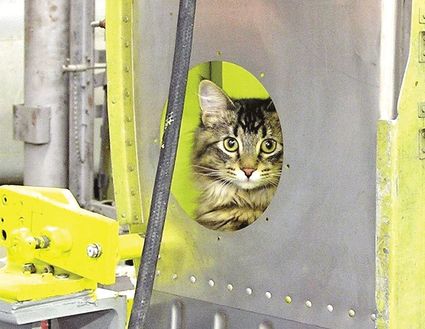 Pet owners love to talk about their pets. At Fleming Field Airport in South St. Paul, those conversations happen a lot. Sierra Hotel Aero, Inc. Quality Assurance Manager Kathy Fox said it was quite natural that the first ever Pet Expo should arise from those conversations.

"It is common practice for people at many businesses on the airport grounds to bring their pets to work with them," said Fox. "When we started looking at the various organizations that the pets came from, we realized there are actually thousands of pets, in our state looking for homes. We decided to have a Pet Expo to raise public awareness in hopes of getting some of these animals into homes."

Though finding homes is important, Fox says that is not the only reason behind the Pet Expo.

"There are a lot of people doing great things with and for animals and with and for people that include more than fostering and rescue," said Fox, "so we wanted to help spread the word about the awesome work they are doing also."

Organizations attending the Pet Expo include Pets Loyal to Vets, a service assisting veterans experiencing challenges returning from war and stress situations; a gentleman who will provide an animal agility demonstration, which is designed to showcase an animal's willingness to work with his handler in a variety of situations; a grooming school that will provide information about training; a woman demonstrating Animal Message Training; a variety of pet services vendors of animal food and supplies; and Basic Animal Rescue Training (BART) an organization that empowers firefighters and first responders to be prepared and equipped to address the needs of pets and livestock in emergency and disaster situations.

"So often people are prepared to do what they need to do with people in situations when there are massive emergency events," said Fox. "When you look at events like Hurricane Katrina, major fires, and the bigger events when hundreds or thousands of people are evacuated, sometimes thousands of animals are left behind or they are just out roaming with no place to go because their owners have had to leave. So BART is trying to empower people to help with the pet and livestock situation in those cases."

The idea that grew into a plan has blossomed with enthusiastic interest from all involved.

"We just reached out to people in the community and invited them," said Fox. "We've had a really good response. We are basically at capacity for the number of vendors and rescue organizations we can provide space for. The public is invited to come to learn what is going on with these organizations in our communities.

"We even have a pet costume contest. We're doing a parade pass by at 2 p.m. for judging. The winners will be announced at 3:30 and prizes awarded."

If you love animals, you want to be at the Commemorative Air force MN Wing (KSGS-South St Paul, MN), Saturday, October 17 between 11 a.m. and 4 p.m. for the first ever Planes 'n Paws Pet Expo. For more information visit planesnpaws.com and click on the ABOUT link.