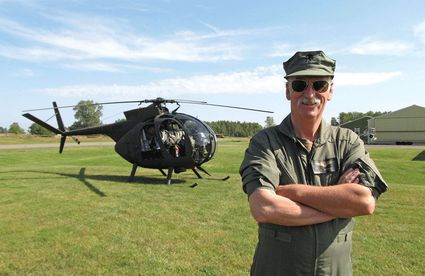 John A. Roxbury from Princeton Township was a Marine helicopter pilot, flying the Boeing CH-16 in Vietnam. Roxbury says he currently owns the OH-6A, a Light Observation Helicopter (LOH) "becasue it is a lot of fun, it has a Vietnam combat history, and I cannot afford a large marine transport helicopter." Roxbury flies out of the Princeton Airport.

Flight Expo 2015 at the Princeton Airport was held in celebration of the 70th anniversary of VE-Day. The Commemorative Air Force displayed the B-25 Miss Mitchel and gave rides in the Vultee BT-13.

Breakfast and lunch were served on the grounds both Saturday and Sunday, hosted by the Princetons 4-H group. EAA Chapter 237 provided Kiddie Rides for toddlers. Young Eagles gave free flights on Sunday.

The Expo was enjoyed by all.

Pilot Jordan Deters of the Commemorative Air Force gives a ride to a very enthusiastic William Rein during the Labor Day Flight Expo at Princeton Airport.