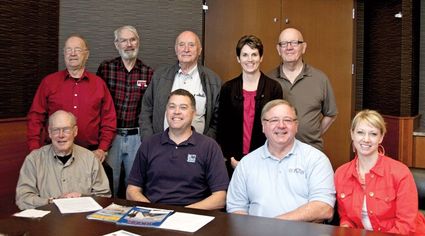 Though receiving its non-profit status was a huge milestone for the Blaine Airport Promotions Group (BAPG), the organization, based at Anoka County Blaine Airport simply checked the accomplishment off their To Do list and kept on going.

These lofty goals had a very humble beginning. Harvey Karth the driving force at the inception of the group, and Roger Hansen, current BAPG president, and a crew of loyal volunteers put in four years work before attaining the nonprofit status.

At the onset, any event undertaken by the group was paid for by the group, not only in terms of volunteer time, but often with personal funding.

In working on the group's goals, research was undertaken to find out the economic impact the airport provides to the community.

"At that point, we found out 32 million dollars a year was going into the economy of Blaine and the nearby area," said Harvey Karth. "Also, businesses on this airport provide approximately 350 jobs for people in the community."

For the past four years, hands-on learning experiences have been offered to the schools through the government mandated science, technology, engineering and math (STEM) program.

"We give students a complete tour of the airport, introducing them to what an airport is, and to the number of careers that are available," said Hansen. "In approximately four years we've had over 3,500 individual students come to our programs through the schools STEM initiative."

Karth and Hansen gratefully commend participating businesses on the airport grounds for going the extra mile in extending their workspace to students.

"Key Air was one of the first businesses to open their doors to some of our larger classes of young students," said Hansen. "They provide an airport terminal setting just like you see at any large airport, a remarkable challenge during busy daytime activities.

"Bolduc Aviation allows students to see specialized services in regard to mechanics; RC Avionics shares their amazing electronics; SimFlite Minnesota demonstrates simulators. Fibrenew is off the field but Bob Lawson supports our on-field events. Twin Cities Aviation opened its classroom to the American Heritage Girls group this spring for a presentation by General Manager Paul Perovich, who provided information about careers in aviation, forces of flight, and directing the group through their merit badge requirements."

Harvey Karth points out that, while students do enjoy themselves, the goal of BAPG is to make a real impact on the lives of the students.

"The students who come here are actually studying aviation," said Karth. "We don't bring them out just to show off. We show them aircraft so they get the real thing, not just pictures out of a book they work with in school.

"Out here students get to see airplanes, go inside, watch them land, take off, watch mechanics work on them, see what all happens at an airport. Their teachers say it makes a world of difference for students because students see the real thing. They are really enthused when they come here."

BAPG has impacted public awareness of the airport by hosting events, and volunteering support of events held by its members. BAPG volunteers also support and participate in the airport's main event of the year, Discover Aviation Days. According to Harvey Karth, at its inception in the mid 1990s, attendance at Discover Aviation Days ranged from 300 to 400 people on a weekend. In this year's event, over 13,000 people visited over the weekend. Volunteers with BAPG coordinate vendors in the education tent on the grounds.

Educating visitors and school students about careers in aviation is one of the primary goals of BAPG. Hansen and Karth said being a pilot may be the most highly visible career in aviation but it takes more than a pilot to get an aircraft into the air.

"Air traffic control, mechanics, aviation manufacturers, engineers, the list goes on and on," said Hansen. "Careers in aviation extend to insurance, communications, law, you name it."

One of the original motivations for the BAPG founder was to address the issue of gates surrounding community airports. Though gates are often perceived by the public as a barrier t keep them out, Karth explains that visitors are welcome.

"We have two gates that automatically open when visitors can drive up," said Karth. "All they ask is to watch the signs so drivers know where they are and are not allowed to drive. Obviously there is no driving on runways."

Anoka County Airport has also created a visitor area in the middle of the airport, near the control tower where community members are invited to spend time watching air traffic. Sheltered picnic tables are available that also provide a speaker system by which visitors can hear communications between aircraft and the tower.

"That gets used some but it could be used a lot more," said Karth. "You've got planes coming and going from all directions there."

With a solid foundation of four years of activities promoting the airport and building relationships with the community, BAPG is now prepared to accept donations that will enhance their ability to proceed. Roger Hansen noted that fund raising efforts are focused on specific projects rather than a general fund for the group.

"We are currently looking at several possibilities for fund raising including developing scholarships for students entering aviation studies, helping schools with their busing costs, and others as needs arise," said Hansen. "We want to remain competitive in our industry by taking action and working with young students to unlock their future potential by introducing them to STEM fields related to Aerospace."

Activities with students are firmly in place BAPG is open to suggestions from participating members to move to the next level of promotion.

"If you go back to our origin, our idea was to promote the airport, and the businesses on the airport. In order to do that, we had to have a method. That method was through education, to build that program. Now we are moving towards business opportunities, not only on the airport but also for the businesses that reach beyond the fence. Though community airports appear small, they have the capacity to reach the world."

With men like Harvey Karth and Roger Hansen at the helm, such capable board members, and the loyal crew of dedicated, enthusiastic volunteers, that would appear to be the goal BAPG is going for in its support of Anoka County Blaine Airport.