Aircraft Owners and Pilots Association (AOPA) is making a difference in how today's society views aviation. AOPA president Mark Baker, and his fully dedicated, energized team are putting the awe back in awesome where aviation is concerned by reaching out to people on a personal basis. Baker was smitten with the love of aviation as a child. He recalls lying on a hill, looking up at the sky, "simply for the joy of watching those round engines go by." His ensuing years of experience, engaging in aviation for work and play, have only added to his contagious enthusiasm for flying.

Once upon a time, AOPA, like many other aviation support groups, held an annual expo, built on the premise that bigger the event, the more people attracted to it. In its own way, and in its own time, that method was effective. However, when Baker took the helm, he and his team decided to address the public's waning interest by getting back to the heart of aviation. Baker and the AOPA team now reach out on a one to one basis.

"We decided to have regional fly-ins toget people who didn't have the time, or didn't want to spend the money to go to one event once a year," said Baker. "So we now have four or five smaller events a year."

The August 22 Anoka County Blaine Airport AOPA Grass Roots Fly-In had that down home, I-want-to-be-there feeling. AOPA team extended interest in communicating with the locals before, during, and after the event. Several AOPA reps took time to attend the Minnesota Aviation Trades Association Annual (MATA) meeting where they introduced themselves and began gathering input, two days before their own event.

AOPA graciously accommodated attendees by providing shuttle busses to and from the site. As the band played, the campfires crackled, and John Klatt defied the laws of gravity by stunt flying overhead, Baker and the AOPA team continued accumulating people's ideas, opinions and suggestions on how to bring aviation to the forefront of society's awareness once again.

Saturday's Fly-In at Jane's Field on the Anoka Airport was invigorating, joyful, and rewarding. Over 160 aircraft flew in. Over 2,700 people attended. Vendors successfully touted their wares and made their connections. 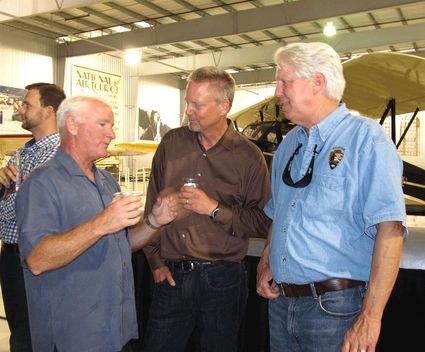 AOPA president Mark Baker, Cirrus CEO Dale Klapmeier, and Golden Wings Aviation Museum owner Greg Herrick share ideas at the Cirrus Run Up meeting prior to heading over to Surf Side for the picnic.

While aviators like Julie Clark with her T-34, and airport/community relations specialists Roger Hansen and Harvey Garth from the Blaine Airport Promotions Group, and hundreds of established aviation enthusiasts were there, it was the families and individuals who were coming to a fly-in for the first time that drove the success of the day.

"I think there's a bit of a belief, particularly since 9/11 that these fences that went up around the airport were meant to keep people out," said Mark Baker. "It's really sad. That's one of the reasons we have these regional fly-ins, to make sure the fences stay open; that people come out to enjoy the airport. These are really a public entity. We should celebrate them. Community airports are, and should be, open to everybody."

With the efforts of the AOPA team and others willing to join them, it looks like that is exactly where the public's perception of community airports is headed, one person and one family at a time.