Airport of the Month: Roseau 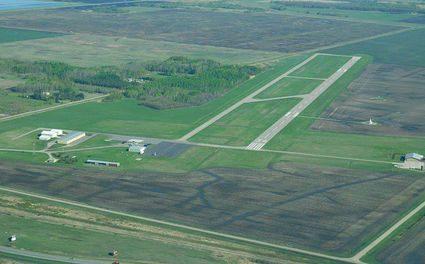 In 1954 Edgar Hetteen took a much deserved vacation. He left "Hetteen Hoist and Derrick" of Roseau in the hands of his trusted employees. When he got back he discovered the workers had built a snowmobile.

They used a grain silo conveyor belt for the track and made the skis from the bumper of an old Chevy. Edgar was not impressed and he needed money for the next payroll. He sold the machine for $465, but his employees were persistent. Eventually Edgar saw the light and in 1956 the first "Polaris Snow Traveler" came off the assembly line. Meanwhile Roseau aviators were discussing a new airport. It's no coincidence that Polaris Industries and the Roseau Airport have grown up together. Polaris is one of those companies that knows how to effectively use General Aviation.

Roseau's first airport was opened in 1946 with $1,000 from the city and sweat equity by the local aviation community. A building was added in 1947 and Roseau native Rudy Billberg briefly operated a flying school there. Billberg learned to fly in the 1930s. At the beginning of World War II he was teaching in the Civilian Pilot Training (CPT) program. Later in the war, he flew for another Minnesota aviator named Noel Wein, supporting the military in Alaska. He divided his flying career between Alaska and Minnesota, but eventually retired to his hometown and wrote a book about flying in Alaska called "In the Shadow of Eagles." In 1998 the Minnesota Aviation Hall of Fame inducted Billberg and Roseau Municipal Airport was named "Rudy Billberg Field."

Roseau's original airport eventually included two grass runways, but the site was restricted. In 1958 a committee was formed to investigate other locations for the airport. Edgar Hetteen was one of the members. They picked a site three miles east of town where the airport is now located. The new Roseau airport opened in 1963 and was upgraded to the current configuration in 1990. The primary runway is 4400 feet long, with Runway End Identifier Lights (REILs) and Visual Approach Slope Indicators (VASI). A full length parallel taxiway provides access to the terminal area. There's also a turf secondary runway that's 2500 feet long. Roseau's easy to find because a Very High Frequency Omni Range (VOR) is located on the airport. RNAV/GPS approaches are also available if the weather requires. There's an automated weather station (AWOS) and communications outlet (RCO). Both Jet Fuel and Avgas can be purchased 24 hours a day. A courtesy car is available at the Arrival/Departure Building and there's a hangar for over-night storage. Rental cars can be had for longer visits. You can camp on the airport if you like that sort of thing. A new hangar and Arrival Departure building are in the planning stages.

Roseau is in the geological transition area between the big woods and the plains. Local topography is dominated by the Roseau (French for Reed) River. It's a paradise for the outdoors types. There's a golf course in town and the Polaris Experience Center offers self-guided tours. Polaris has grown into an international company that also makes motor cycles and all-terrain vehicles. They have a very professional flight department that operates two Model 200 King Airs and a Citation XLS Jet. Corporate headquarters are now in the Twin Cities, but they fly a regular shuttle to Roseau that transports over 3000 passengers each year. Polaris pilots have a symbiotic relationship with the City providing radios, training, and other assistance to the people who do such a good job of maintaining the airport.

So you've flown to Roseau, done your business, maybe played some golf and visited the Polaris facility. You plan to spend the night at one of the great hotels in town and have just finished dinner at one of the equally good eating places.

The conversation is slowing down, and you're looking for something to liven it up a bit. Just say "hockey" and you're good for hours. Roseau High School has a legendary hockey team. They've been in more state tournaments than any other school. Roseau boys "play up" against the big schools and are second in state championships only to a huge Twin City suburb with about 15 times the population of Roseau. No fewer than 10 Roseau alumni have gone on to play professionally. The locals are justifiable proud of the Roseau Rams, and may even persuade you to fly back in January to see a couple games.