Seeing the layout of the grounds caused excitment even before attendees arrived at AirExpo 2015 at Flying Cloud Airport in Eden Prairie. With welcoming weather, spectacuar aircraft, and an inviting array of events, people flocked to the event in droves.

A special treat was had when Paul Ehlen of Air Corps Aviation, owner and pilot of the P-51 Mustang aircraft, Sierra Sue II, and Joseph Aaron Hawkins, owner and driver of a 2002 Mustang GT automobile got together for an impromptu photo shoot arranged by Bruce Mattson of AirExpo 2015. 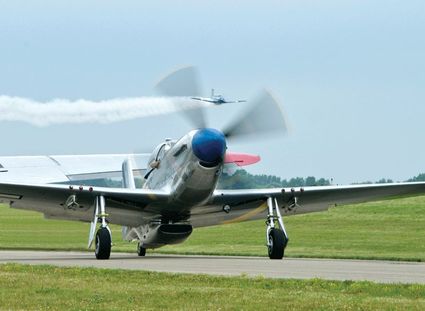 A P-51D passes the crowd while a Beechcraft T-34 makes a fast pass with smoke. Paul Ehlen and John Sinclair were the P-51 pilots for the weekend.

Photographer Andrew Chow captured the image featured on the Minnesota Flyer August cover. Chow, a Hugo resident, has been involved in photography for over 10 years. He holds freelance workshops and teaches photography classes for Anoka Hennepin Community Education.

Chow was quick to pick up on the opportunity for a rare photo shoot when the two Mustangs and their owners got together on the grounds of Flying Cloud Airport during the AirExpo.

Other activities over the weekend included an evening with living legends from World War II, the Korean War, Vietnam War and others. Jacque Black, 14-year-old daughter of Gary Black and Celeste Curley-Black captivated a full house during the Evening with Eagles Banquet by her dignified reading of America's White Table by Margot Theis Raven.

The Minnesota Flyer, one of the sponsors of AirExpo 2015 was present to cover the event. A particularly enjoyable happening was watching attendees draw their favorite aircraft on the Minnesota Flyer whiteboard at our outdoor tent. Thanks to all who offered their artistic renditions.