Airport of the Month: Aitkin 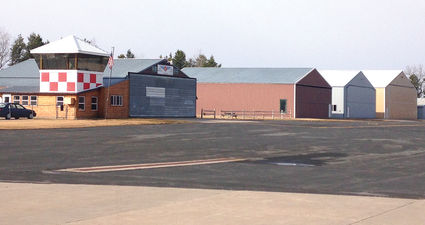 William Alexander Aitkin was quite a guy. A native of Scotland who immigrated to the United States in the early 19th century, Aitkin became chief trader for the American Fur Company which was owned by John Jacob Astor. From his headquarters on Big Sandy Lake, Aitkin supervised a territory that included much of Northern Minnesota and North Dakota. After a falling out with Astor, he went in business for himself and operated a series of independent trading posts. He was reported to be one of the first Europeans to advocate for the rights of Native Americans. He also sponsored one of the first facilities for primary education in Minnesota. But, his support for education might have had something to do with the fact that he had six wives and at least 25 children.

Fortunately both a county and a city were both named after Aitkin. Since both government units have the same name, the airport they sponsor together could avoid a cumbersomely long and hyphenated name usual for jointly owned airports. It's simply called the Aitkin Municipal Airport and has everything you need for business or pleasure flying. There's a 4000 foot paved and lighted primary runway and a turf runway crosswind that's 3100 feet long. Thanks to an arrangement with the local snowmobilers, the turf runway is groomed in the winter for ski flying.

Aitkin also has an automated weather station (AWOS), communications outlet (GCO) and the usual RNAV/GPS approaches for less than ideal weather. If you still remember how those things work, there's a "Non-Directional Beacon" (NDB) on the airport too. The Arrival Departure building features meeting facilities and a pilot lounge. The airport has a courtesy car for ground transportation and taxi service is also available.

Aitkin County and the city opened the airport in the early 1950s with a single grass runway. From the very beginning, it was blessed with a Fixed Base Operator (FBO) thanks to Steve Kurtz. During World War II, Mr. Kurtz navigated Army Air Corps cargo planes over the "hump" from India to China and back. After the war, he supplemented his navigation skills with commercial pilot and flight instructor certificates. In 1946, he started "Steve's Flight Service" and moved to Aitkin when the airport opened. Steve stayed for over 50 years, doing flight instruction and aerial application. The county and city honored his contribution to aviation by adding "Steve Kurtz Field" to the name of their airport. A plaque near the self-service fuel system is his memorial and marks the site of his operation. Former Army helicopter mechanic Dale Johnson worked with Steve "for a lot of years." In 1989, Dale partnered with Ray Hogan and Bert Norgren to open a repair shop at Aitkin. They also sold fuel and in the next few years, 20 new hangars were built at Aitkin effectively doubling the number of based aircraft.

People in Aitkin evidently like to party. The town's on the Mississippi so the events naturally include "River Boat Heritage Days" during the 1st weekend in August. There's also the "Festival of Adventures" during the 2nd weekend after Labor Day, and the "World Famous Fish House Parade" on the Friday after Thanksgiving. The local flyers like a party too. Aitkin Airport hosts a fly-in the last Sunday in June that features breakfast and a car show. Breakfast orders often exceed 2000. If you want fun with less excitement, the county boasts two excellent golf courses, plus there's lots of water around for boating and fishing.

For overnight stays, a number of resorts and hotels are near the airport. If you like sleeping with your airplane, there's a really nice camping area on the field with showers available in the Arrival/Departure building. While you're waiting for the shower, you can check out the picture of Aitkin resident and former Marine Aviator Victor Erickson. Like Steve Kurtz, Vic was a World War II veteran and airport advocate. He flew the famous Corsair and the airplane in the picture is on display at the Smithsonian in Washington, DC. Mr. Erickson operated the local land abstract company and based several airplanes he owned the Aitkin Airport. His contributions included documenting the airport's activity and economic value, which was the key to getting the paved and lighted runway built in 1975.

Aitkin Aviation picked up where Steve Kurtz left off. They offer fuel, maintenance and flight training. You can get your airplane fixed and do a "tail wheel" endorsement or float rating while you wait.