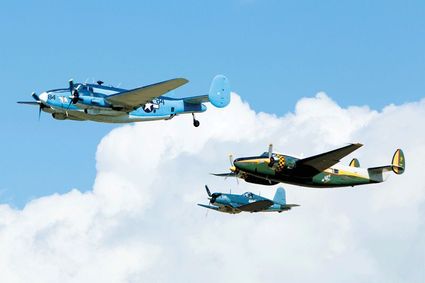 In a spectacular vision for spectators, the PV-2 Harpoon, Howard 500, and Corsair fly together over the field at the Ray Fagen Memorial Air Show.

The Ray Fagen Memorial Air Show of June 20 was a day of tribute to World War II Veterans, to commemorate their sacrifices, their contributions to the freedom we hold so dear. The American Legion was on hand to present the flag at the show's opening, a ceremony for which the crowd was on its feet, hands over their hearts. 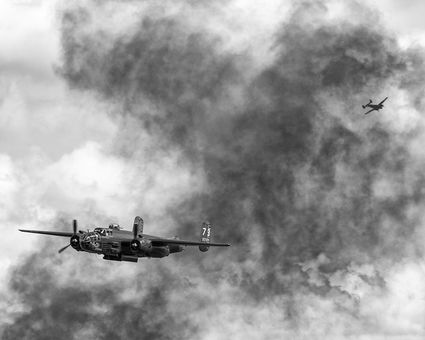 Bombs Away was the theme of this year's show. Here, the B-25 Paper Doll flies through the impressive pyro mock battle. With reenactment players during the day and the mock battle in the evening, visitors were reminded that the freedom we share today was paid for, and continues to be paid for by the lives of men and women willing to fight for the entire country.

The reenactment of tanks, soldiers, and gunfire at the foot of the hill behind the hangar museum was realistic enough to bring tears to the eyes of those who reflected on the very real war it represented. Repeated during the course of a day, the statement that freedom isn't free was readily brought to the minds and lips of attendees.

The B-25, named Paper Doll, was taken out of its display area at the Fagen Fighters WWII Museum and sent into the sky, creating a magnificent view for spectators. The PV-2 Harpoon, Howard 500, and Corsair also flew, sometimes together for all eyes turned skyward.

Music was part of the day's

Evening brought a spectacular though truly chilling pyro show as 1940s aircraft flew through billows of smoke indicative of the show's theme, Bombs Away.

"The day belongs to the 40's," said Evan Fagen, grandson of Raymond Alva Fagen (1918-2010). "We want to honor grandpa and his generation, the greatest generation."

The Ray Fagen Memorial Air Show does just that. Salute!