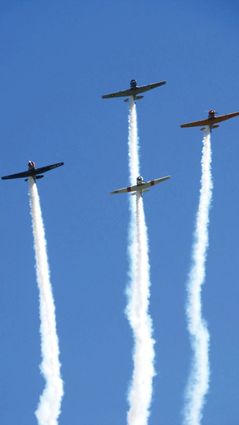 Discover Aviation Days 2015 gathered crowds at every aircraft on display at Anoka County Blaine Airport at Jane's Field. The skies were alive with stunning sights, the crowd generous with their ous, ahhs, and other exclamations of delight.

Hot buttered syrupy pancakes, with bacon, sausages and eggs were served for breakfast in the comfort of the main hangar while food vendors provided a wide variety of delicious fare. Attendees who stayed the day engaged in the picnic type lunch in the hangar or made their way down the tarmac to their favored vendor.

Historian Tom Lymburn, the living encyclopedia of aviation facts and figures emceed the two-day event with all the flair attendees have come to know and love. A wide variety of aircraft from Greg Herrick's 1927 Ford Tri-motor, to the 6000th Cirrus SR22T aircraft were available for folks to see up close on the ground and high above in blue skies. TheT-6 Thunder flight team also wowed the crowds with precision flying the crowds have come to admire.

Highly capable, very willing members of the Civil Air Patrol assisted in keeping attendees safe and out of harms way while aircraft came and went from the grounds at a brisk pace.

Folks were also drawn to the gigantic white education tent where aviation centered displays kept everyone interested and asking questions. Some booths were interactive, some had takeaways, others had wares for sale. The combination provided a little bit of something for everyone who entered the big top.

Military veterans were honored with speeches near the flag pole, a valued place in the parade of old time automobiles, and an extensive display put together by Roger Hansen, Education Coordinator of the Blaine Airport Promotions Group with Dick Houck in a supporting roll for special sign title and printing which was housed in the Golden Wings Museum. 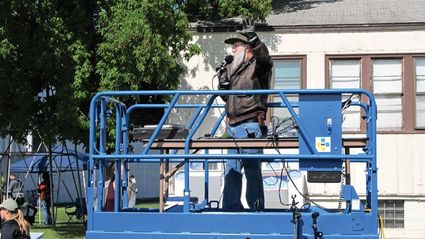 Historian and emcee Tom Lymburn guides the eyes of the crowd to the skies during Discover Aviation Days at Anoka County Blaine Airport in May.

At the beginning of the day, the United States flag was properly and ceremoniously raised by members of the Civil Air Patrol. At the end of the day, the flag was respectfully lowered, folded, and stored.

Newcomers to Discover Aviation Days were members of Minneapolis Piston Poppers Model Airplane Club who flew their aircrafts outside the education tent in a specially cordoned off area.

EAA Chapter 237 was the favorite for the kiddies with rides made specifically for their delight.

Sunday increased the joy of attendees with more perfect weather, fabulous planes, and the continuation of interesting exhibits. Attendance for the weekend was pleasantly even more than organizers expected.