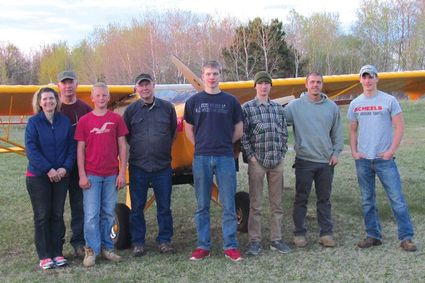 It is not uncommon for a kid to dream of building an airplane. In Princeton, it actually happens.

"Right now we're working on a Kitfox," said John Bjornstad, Flight Expo's Build A Plane project manager. "The Kitfox came to us as a donation. Most of the airframe was complete but all the systems needed to be installed and some modifications needed to be put in place so we figured out what we needed to do, then every week we took a task to complete.

"We began the program in mid-October last year. We gather once a week on Tuesday nights, and every third Saturday of the month."

Aviation is in Bjornstad's blood. His grandfather is legendary aircraft race plane and aircraft engine builder the late John Sandberg (1931-1991), (Owned Tsunami aircraft - donated to Flight Expo, Inc in 2013.). His aunt, Sharon Sandberg, (President of Flight Expo, Inc a 501c3 organization that built the Minnesota Wright Flyer) organized the team that is in the process of rebuilding Tsunami, the aircraft designed for speed record attempts and air racing, owned and flown by her father. "I was named after my grandpa," said Bjornstad. "I was really close to the project when I was a kid."

A & P and IA Duane Kruse, (Sharon's husband) who also works with Flight Expo's Build A Plane program. He has years of experience in aircraft restoration, having worked on a B-25, Noorduyn Norsman, Stensons 108-3, 108-2, Super Cubs, Pawnees and many other aircrafts. He knows the value of having kids involved with building planes.

"We were involved with an EAA Chapter in Princeton where we live, and with the Young Eagles program we give kids rides in airplanes," said Kruse.

While the experience of flying often made a huge impact on kids, Kruse said they wanted to offer an opportunity to become more deeply involved beyond that initial experience. 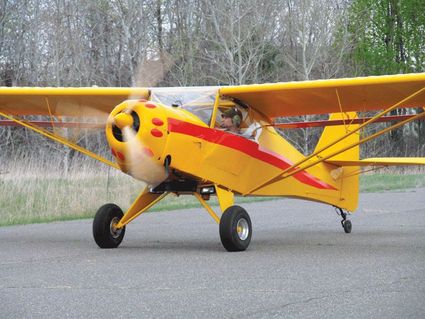 The Build A Plane programs results in a flyable aircraft.

Flight Expo's "Build A Plane" program gave us an opportunity to get kids involved with hands-on experience where they had time to spend finding out how an airplane works, where they are actually handling the airplane, and restoring parts on it," said Kruse. "We see a really big difference in the level of commitment that the kids have when they become a part of the program."

The youngest member of the Princeton team is 14. The oldest is 17. The first aircraft they restored was a Kitfox.

Flight Expo, Inc, a national, non-profit organization began operations in 1996, dedicated to promoting aviation through education and aircraft preservation. Build A Plane, also a national non-profit organization began their operations in 2003, dedicated to promoting aviation and aerospace careers by giving young people the opportunity to build real airplanes. For more information about how to join, visit Flight Expo, Inc. (www.flightexpo.org) or Build A Plane (www.buildaplane.org).