Airport of the Month: Flying Cloud 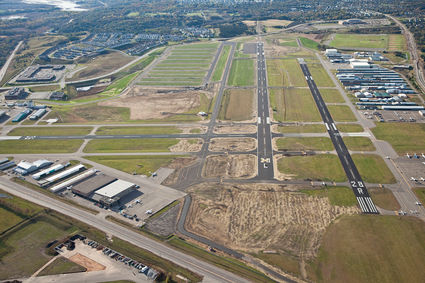 In 1879 John Cummings was farming in what's now the City of Eden Prairie. He built a house just north of today's Pioneer Trail. The "Cummings" house is still there. It's on the National Register of Historic Places and owned by the Eden Prairie Historical Society. Around 1933 the Cummings farm was purchased by two prodigious agriculturalists, Harriet and Edwin Sprague Phipps. Harriet had a huge Peony garden next to the house and you can see that too when you visit. Edwin was known as the "Asparagus King" and sold vegetables from a stand on Highway 212. As World War II approached, their son-in-law, Martin Grill, took over the farm. For some reason Mr. Grill was known as "Pappy". He had an interest in aviation and built a turf runway on the farm.

Once the US joined the War, the US Navy began training pilots at Wold-Chamberlain Field. The cadets needed auxiliary fields to practice take offs and landings and the Navy got permission from "Pappy" Grill to use his runway. After the War, Mr. Grill sold the runway and some adjacent land to American Aviation, Inc. who established it as a public airport. John Stuber was the first manager and gave it the name of "Flying Cloud" based on local Native Americans lore. In 1948 the Metropolitan Airports Commission (MAC) purchased the airport and paved the runway.

No doubt the previous owners would be amazed at the present day Flying Cloud Airport, to say nothing of the modern City of Eden Prairie. The city has grown into a residential and commercial giant, and the airport with it. Today the main runway at Flying Cloud is 5000 feet long and 100 feet wide. It has an Instrument Landing System, Approach Lights, Precision Approach Path Indicators and High Intensity Runway Lights. In aviation jargon that's ILS, MALSR, PAPI and HIRLs. Those facilities make Flying Cloud a truly all-weather airport. There's also a parallel runway that's 3900 feet long and a crosswind runway that's just over 2690 feet.

After MAC took over, the airport started to grow pretty fast and a control tower was built in 1963. That was just in time, because by 1968 the airport was averaging over 446,000 annual operations. That's an average of 50 take offs and landings every hour, and that year it was second busiest airport in the FAA's Great Lakes Region, with Chicago's O'Hare being first. By the 1990's the character of the traffic at Flying Cloud was changing pretty fast. Flight training that had driven the operations in the 60's and 70's was slowing down, and business aviation was on the rise. Instead of 50 Cessna 150s or Piper Cherokees every hour, the tower was now clearing a smaller number of Citations and King Airs to take off or land.

MAC responded to the changes with a major improvement program that lengthened Runway 10L-28R from 3600 to 3900 feet in 2008, then 10R-28L from 3900 to 5000 feet in 2009. At the same time a new parallel taxiway was constructed and a building area developed on the south side of the airport. Four hundred and twenty airplanes call Flying Cloud home, but there's room for a lot more hangars. A plan is being developed to improve runway 18/36 as well.

Thunderbird Aviation, a leader in aviation since 1962, calls Flying Cloud its home. The business is owned by Nancy Grazzani-Olson, that was started by her late father Albert, a giant in Minnesota aviation and a member of the Minnesota Aviation Hall of Fame. They offer any kind of service you could want for both GA and corporate aviation.

Flying Cloud offers a wide choice of Fixed Base Operators.

Some offer courtesy cars or have rental cars available. Just about any kind of aviation service you need can be had at Flying Cloud, plus there's both full and self-service fueling. You can rent the "Cummings House" for events like parties and weddings, and it's within walking distance of several FBOs. Wouldn't a party at the house the airport's founder once called home be a pretty neat event? On the subject of founders, Sherm Booen, who started this magazine kept his airplane at Flying Cloud. The airport was his second home. As another Minnesota Aviation Hall of Fame inductee and Flying Cloud denizen, Anders Christenson, said, "So, if you were at Flying Cloud Airport, you would meet Sherm Booen." Another neat event for those who had the privilege.